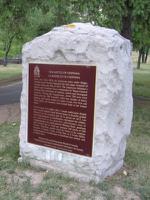 This monument near the city of Niagara Falls, Ontario, commemorates the Battle of Chippawa, fought on the site on 5 July 1814 (photo used with permission from the website www.ontarioplaques.com). 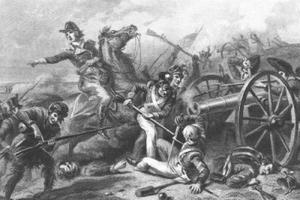 Battle of Chippawa National Historic Site commemorates the 5 July 1814 battle along the Niagara River, 1.6 km south of the community of Chippawa (now part of the city of Niagara Falls). The Battle of Chippawa was an American victory over the British during the War of 1812. Fought between equally matched combatants, it proved that the American infantry could be as good as the British infantry.

The battleground was designated as a national historic site in 1920, but is owned and administered by the Niagara Parks Commission. Called Chippawa Battlefield Park, it lies on the west side of the Niagara River Parkway. The stone cairn and plaque of the Historic Sites and Monument Board of Canada is located beside the Niagara River Recreation Trail, which runs along the east side of the park.

The Chippawa battlefield is notable as the most pristine War of 1812 battle site. It comprises a wooded section (where the first phase of the battle took place) west of the open plain, another wooded section to the north, and, to the south across Usshers Creek, mixed woods and fields. It looks very similar to what the combatants would have seen. In the years following the battle, the site had a number of owners but most of it was used for agriculture. There was, therefore, great concern among many people when it was announced in 1991 that a substantial portion of this historic site, still privately owned, was slated for residential development. Responding to this concern, the owner offered to sell the land for heritage preservation.

In 1995, Ontario's Niagara Parks Commission purchased the 121-hectare battle site. Most of the site has been left undisturbed. A monument was erected to commemorate both the battle and the American, Canadian, British and Aboriginal forces who died there. A series of display panels along a walking path explains the various phases of the battle in detail.

Overview of the Battle of Chippawa

Before dawn on 3 July 1814, a vast American invasion force under the command of Major General Jacob Brown began crossing the Niagara River from the Buffalo, New York, area to the Canadian shore. Fort Erie, garrisoned with only a small detachment, surrendered that afternoon.

The following day the Americans began to advance northward along the Niagara River, while the British under Major General Phineas Riall moved south from Fort George. The first phase of the battle took place in a wooded area immediately to the north of Street's Creek (now called Usshers Creek). It primarily involved the militia and Aboriginal warriors of both sides. This was a deadly hit and run contest that resulted in heavy casualties.

However, the major part of the battle took place in a large open farmer's field, referred to at the time as the "plain," that lay between a wooded area and the Niagara River. Both sides had approximately 2000 men in action.

Riall was at first deceived. Since the Americans, led by Brigadier General Winfield Scott's First Brigade, were wearing grey uniforms instead of regulation blue, he thought he was facing poorly trained militia. Riall quickly realized his error. The Americans were, in fact, well-trained, well-disciplined regulars. After about 40 minutes of exchanging musket fire, Riall was forced to retreat to the north side of Chippawa Creek (better known now as the Welland River), tearing up the bridge behind him.

Casualties were heavy. More than 700 men from both sides were dead, wounded or missing in action. The dead were buried on the field of battle. 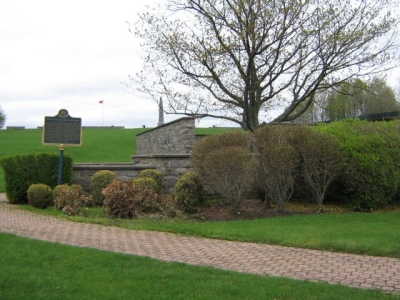