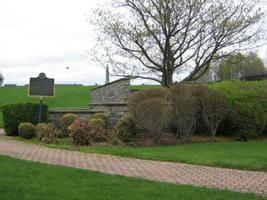 This monument near Morrisburg, Ontario, commemorates the Battle of Crysler's Farm, fought on the site on 11 Nov 1813 (photo used with permission from the website www.ontarioplaques.com).

The Battle of Crysler's Farm National Historic Site commemorates a battle fought during the War of 1812 on the fields of farmer John Crysler on the banks of the St Lawrence River near Morrisburg, Ont, on 11 November 1813. The British were grossly outnumbered at this battle, but succeeded in defeating an American army, ending their plans to attack Montréal.

Before a national program of designating historic places was developed, the Government of Canada erected a monument commemorating the Battle of Crysler's Farm on the battlefield in 1895. In 1920, the recently formed Historic Sites and Monuments Board of Canada designated the place as a national historic site, and the board marked it with a bronze plaque in 1923.

In 1958, the battlefield was flooded through the construction of the St Lawrence Seaway, and the monument and soil from the site were moved to higher ground, adjacent to the newly established Upper Canada Village. The St Lawrence Parks Commission manages both historic sites. A small interpretive centre was opened nearby in 1959 to tell the story of the battle. As part of the commemoration of the bicentennial of the War of 1812, a new visitor centre was constructed. Each year, re-enactors from Canada and the United States gather here to stage the battle.

Overview of the Battle of Crysler's Farm

In the early autumn of 1813, American Secretary of War John Armstrong set in motion a grand strategy to capture Upper Canada by sending 2 armies to attack Montréal, which would force the British to abandon all of their possessions west of that city.

One army under Major General Wade Hampton was ordered to advance from Lake Champlain towards Montréal while a second army under Major General James Wilkinson was to sail down the St Lawrence to join with Hampton in the invasion. Hampton's army began the campaign but a force of Canadians and First Nations stopped his army on 26 October at the Battle of Châteauguay.

Wilkinson's army left Sackets Harbor, New York, on 17 October. British gunboats under Commander William Mulcaster fired on the American fleet near Grenadier Island and returned to Kingston to report the invasion. At Kingston, British Lieutenant Colonel Joseph Wanton Morrison of the 89th Regiment assembled a "corps d'observation" of 650 men and boarded Mulcaster's flotilla to sail down the St Lawrence to harass Wilkinson's army. His force disembarked at Prescott and was joined by 240 men of the Prescott garrison to continue the pursuit of the Americans. This small army then marched down the St Lawrence, arriving at Crysler's farm on 10 November.

On the morning of 11 November, Wilkinson decided to attack Morrison's force of 1169 regulars, Upper Canadian militia and Mohawk allies so they would not threaten the Americans during their descent of the treacherous Long Sault rapids in the river. Wilkinson ordered Brigadier General John Boyd to lead 2500 men against Morrison's force.

Wilkinson's demoralized army continued the descent of the St Lawrence, stopping near Cornwall on 12 November. Here Wilkinson learned that Hampton's army, defeated earlier at Châteauguay, would not be joining his force for an assault on Montréal. Wilkinson ended the campaign and led his men back to the United States. Montréal was saved.