Soldier and war artist Louis Weirter witnessed Canadian troops' capture of the village of Courcelette, during the Battle of the Somme, in September 1916. He then painted the scene in 1918.

Allied commanders were desperate for reinforcements after a summer of futile fighting and the heavy casualties suffered during the 1916 Somme offensive in northern France. On the first day of fighting alone, more than 57,000 British soldiers were killed or wounded, including more than 700 soldiers of the First Newfoundland Regiment (see Battle of Beaumont-Hamel). As a result, the Canadian Corps, then stationed in Belgium, was moved south to help with the fighting in the Somme valley.

On 15 September, three divisions of the Corps launched an attack on German lines to capture the ruined remains of the small village of Courcelette. Two innovations helped the troops in their assault. Rather than wait for their army’s artillery bombardment to end before charging across no man’s land and into enemy guns, the Canadians walked behind a “creeping” artillery barrage that steadily advanced across German lines — keeping enemy soldiers in their dugouts — until the Canadians were on top of enemy lines and ready to fight.

The Canadians also went into battle with the latest attempt to break the trench deadlock: the tank. Six “land cruisers,” as they were then called, entered into history’s first major tank battle at Courcelette (an additional tank was kept in reserve). Although slow, plodding and difficult to move, the large and imposing tanks were an effective psychological weapon against the Germans. Each tank was run by an officer and seven men. Also assigned to each tank were five infantrymen tasked with the removal of casualties ahead of the vehicle.

Only one of the tanks reached its objective during the battle. The rest were either disabled by shellfire, mechanical failures or stuck in an obstacle. ­Still, tanks were able to roll over barbed wire and trenches while firing machine guns and artillery. This capability struck fear and caused some Germans to surrender at the mere sight of them.

“If hell is as bad as what I have seen at Courcelette, I would not want my worst enemy to go there.”
— Lieutenant-Colonel Thomas-Louis Tremblay, 22nd Battalion (French-Canadian) 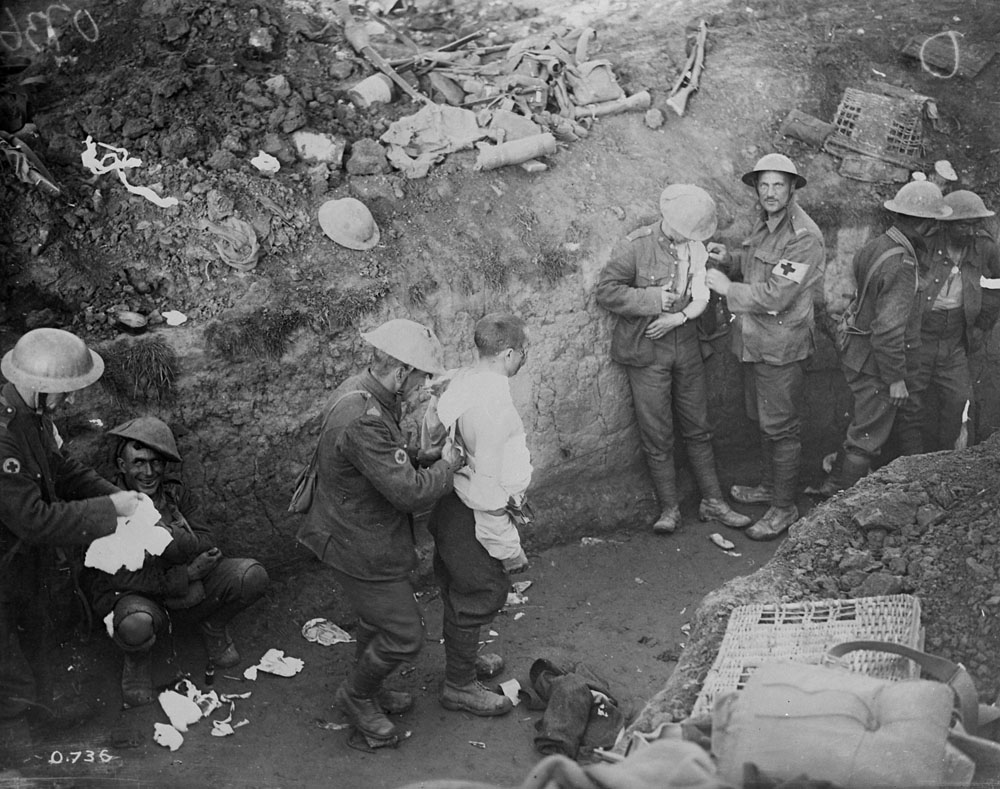 Canadians dressing the wounded in a trench at Courcelette, during the Battle of the Somme, September 1916.
(courtesy Department of National Defence/Library and Archives Canada)

Canadians at the Battle of Courcelette

At 6:20 on the morning of 15 September, the 2nd and 3rd Divisions attacked German lines outside of Courcelette. Accompanied by one tank and following behind a creeping artillery barrage, they overtook the German trenches and a sugar refinery by 8 a.m.

Later that day, at 6 p.m. the 22nd Battalion (French-Canadian) and the 25th Battalion (Nova Scotia Rifles) attacked and captured the village through hand-to-hand fighting and with the help of two tanks. The Germans mounted several counterattacks, which the Canadians pushed back for three days and three nights.

While it was a rare Allied victory on the Somme, the advances at Courcelette cost several thousand Canadian casualties. For example, of the 800 men of the 22nd Battalion who took part in the initial assault, 118 remained after three days of fighting.

DID YOU KNOW?
The 22nd Battalion (French-Canadian) is now known as the Royal 22e Régiment (or the Van Doos — from vingt-deux in French, meaning 22). During the Great War, it was the only francophone infantry unit in the Canadian Expeditionary Force that was active on the front. The Van Doos’ first major attack took place at Courcelette (see also The “Van Doos” and the Great War).

The Red Chateau. One of the last homes left standing in the French village of Courcelette, during the Battle of the Somme, October 1916. This building was used by the Germans and then Canadians as a field dressing station, then was destroyed in November.
(courtesy Department of National Defence/Library and Archives Canada)

Casualties at the Somme

The first three divisions of the Corps continued fighting on the Somme in September and October, suffering about 20,000 casualties overall after weeks of continued attacks and counterattacks. The Fourth Division, fighting alongside British infantry, captured Regina Trench, an important German strongpoint. Canadian casualties at the Somme numbered more than 24,000 by the time the campaign was called off.

When heavy rain, mud and snow finally put an end to the Somme campaign in November, an estimated 1.2 million men from the German and Allied forces had been killed, wounded or captured. The campaign produced no significant gains in territory, but the enormous bloodletting did inspire innovations in military thinking that in the coming year would help the Canadian Corps and other Allied units find ways to solve the stalemate of the trenches.