Thomas-Louis Tremblay, soldier, commander and civil engineer (born 16 May 1886 in Chicoutimi, Québec; died 28 March 1951 in Québec City, Québec). Tremblay commanded the 22nd (French Canadian) Battalion during the First World War. Always willing to lead his men into combat, he forged a reputation as a fearless leader. As commander of the only French-speaking fighting unit in the Canadian Expeditionary Force (CEF), Tremblay believed the battalion was more than a military unit, it was the representative of French Canada in Europe.

Thomas-Louis Tremblay was born on 16 May 1886 in Chicoutimi, Québec to Mathilde Lachance and Thomas Tremblay, a ship captain. His interest in the military was obvious at a young age. As an elementary and high school student, he served in the 6th Militia Battery Lévis. In 1904, he left the province to study at the Royal Military College of Canada (RMC) in Kingston, Ontario. Tremblay was one of a rare breed at the time; very few French Canadians considered a career in the anglophone-dominated military. In fact, only 19 French Canadians, including Tremblay, attended RMC between 1900 and 1914.

Tremblay spent three years at RMC, where he was trained as a military officer and a civil engineer. He graduated in 1907 with a diploma in civil engineering and was hired by the National Transcontinental Railway. In 1913, he worked as a surveyor for the province of Québec. Along with a successful career in civil engineering, Tremblay also served in the 18th Regiment Saguenay.

When Great Britain declared war on Germany on 4 August 1914, Canada was automatically involved in an armed conflict of a magnitude the world had never seen. At the start of the war, Tremblay was an administrative assistant in the 1st Canadian Divisional Ammunition Column. Though many expected the war to be over by Christmas 1914, it was quickly brought to a deadly stalemate by a line of trenches extending from the English Channel to the Swiss frontier. As more men and battalions were needed, the 22nd (French Canadian) Battalion was one of the new Canadian units assembled to answer this demand. Created on 15 October 1914, the unit was the only combatant unit in the Canadian Expeditionary Force (CEF) whose official language was French.

Commander of the “Van Doos”

In March 1915, Tremblay officially enlisted in the CEF and joined the 22nd Battalion as major. (The 22nd was also called the "Van Doos" — from vingt-deux, meaning twenty-two in French. See also The Van Doos and the Great War.) Tremblay was second-in-command to Colonel Frédéric-Mondelet Gaudet, who remained at the helm until January 1916. Tremblay was then promoted to lieutenant colonel and took command. Under his leadership, the unit participated in some of the war’s most important battles, including Courcelette, Vimy Ridge and Passchendaele.

In September 1916, Tremblay led the unit in its first major operation: the Battle of Courcelette in the Somme sector. This was especially important to Tremblay. There was more than victory on the line: the honour of French Canada was also at stake. On the eve of the battle, Tremblay noted in his journal that he wanted to prove that French Canadians were not “slackers.” He was determined to capture the village of Courcelette and defend it to the very last man; French Canada’s reputation depended on it. 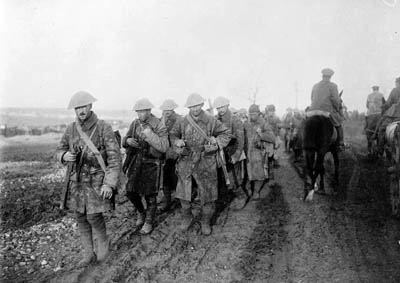 Canadian soldiers returning from trenches during the Battle of the Somme (courtesy Library and Archives Canada/PA-000832).

The unit did not disappoint. And Tremblay was the definition of an ideal commanding officer — courageous, willing to put his life on the line with his men, and having the complete confidence of his battalion. After the war, Governor General Georges Vanier, who had served as an officer under Tremblay, noted, “. . . as long as I followed him no harm would come to me.” Even when the unit was in a tough position, Vanier never lost confidence in Tremblay, always believing that he “would bring us through.” Another battalion member, Claudius Corneloup, noted: “Always smiling . . . encouraging . . . All remember still where, at the head of his battalion, always Tremblay, the fearless Colonel electrified his men and led them to the lasting glory of Courcelette.”

By nightfall, the battalion had captured the village — a defining moment in the unit's history. But the victory was followed by Tremblay's return to England, to deal with a pre-war medical problem. His second-in-command, Major Arthur-Édouard Dubuc took over.

According to Corneloup, the unit changed: “when the sublime Tremblay left, these big children looked at one another. Sadness was written on their faces. A fear rose up, and confidence was gone.” During Tremblay’s absence, the battalion suffered from disciplinary problems and a damaged reputation. When he returned in February 1917, he used courts-martial and executions to restore his battalion’s former character. It worked, and just in time, as he soon led his men through some of the most important operations to date, including Vimy Ridge, Hill 70 and Passchendaele.

Following the German Spring Offensives of 1918, Tremblay was preparing his battalion for an assault on the city of Amiens. The 22nd Battalion did not take part in the initial attack, however, but was placed in reserve. Tremblay was unhappy with this role and even met with the commander of the 5th Canadian Infantry Brigade, Brigadier-General J.M. Ross, to “energetically” protest the unit’s secondary role. He wanted the battalion to lead the attack. Despite these protests, on the morning of 8 August, the attack went on as planned, and with great success, with the unit in reserve. The following day, the "Van Doos" led a second successful attack on the German line at Amiens.

Amiens was Tremblay’s final major operation as commander of the “Van Doos.” In August 1918, he was promoted to brigadier general of the larger 5th Infantry Brigade, a position he kept until May 1919.

Tremblay's courage and leadership were recognized by several awards, decorations and mentions. He was named Companion of the Order of St. Michael and St. George, was awarded the Distinguished Service Order and the Legion d’Honneur – Croix d’Officier, and was mentioned in Despatches and ‘A’ List to high command on four different occasions.

After the war, Tremblay returned to Québec City, where he resumed his career as a civil engineer. In 1922, he became the chief engineer and general manager of the Port of Québec, a position he kept until 1936. In 1938–39, Tremblay was a member of the commission that evaluated the construction of the British Columbia-Alaska Highway.

He also remained a presence in the Canadian military. In 1931, he was named honorary colonel for life of the 22nd Battalion (by this time known as the Royal 22nd Regiment). Although he was not in the front lines during the Second World War, he was inspector general for the Canadian forces in Eastern Canada. He died on 28 March 1951 in Québec City.