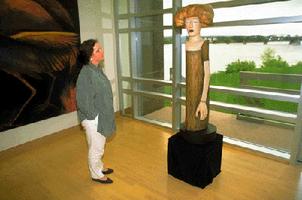 The Beaverbrook Art Gallery, sited across from the Legislative Assembly in Fredericton, New Brunswick, was established in 1959 with funds provided by Lord Beaverbrook. The newest wing, the Marion McCain Atlantic Gallery, was added in 1994 as a tribute to the late Mrs Marion (Billie) McCain, a benefactor and advocate of the work of Atlantic Canadian artists. The new gallery features Atlantic Canadian art through itinerant exhibitions and exhibitions of works of art drawn from the permanent collection of the Beaverbrook Art Gallery.

The gallery has an extensive collection of paintings by Cornelius Krieghoff (1815-1872), and expatriate Canadian post-Impressionist James Wilson Morrice (1865-1924). New Brunswick landscape paintings and works on paper by artists such as Anthony Flower (1792-1875), George T. Taylor (1838-1913), and George Neilson Smith (1789-1875) are also an important part of the gallery's holdings of 19th century Canadian art.

Other Canadian artists represented in the collection include members of the Group of Seven, Emily Carr and David Milne, as well as other 20th-century Canadian artists such as Paul-Emile Borduas, Jean Paul Riopelle, Jack Bush, Harold Feist, Harold Klunder and John Boyle.

The gallery is internationally known for its outstanding collection of British paintings from the Elizabethan era to the modern period, including paintings by Thomas Gainsborough, Sir Joshua Reynolds, J.M. Turner and John Constable. Modern British art is represented by the work of Augustus John, Sir Stanley Spencer, Walter Richard Sickert and Graham Sutherland, including Sutherland's preparatory sketches for his famous portrait of Winston Churchill.