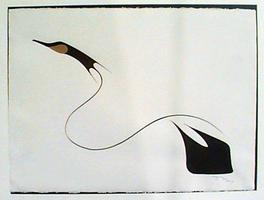 Benjamin Chee Chee, artist (born Kenneth Thomas Benjamin 26 March 1944 in Temagami, ON; died 14 March 1977 in Ottawa, ON). After an unstable youth, Chee Chee, of Ojibwe descent, moved to Montréal in 1965 and was encouraged to develop his love of drawing. His first exhibition, held after his move to Ottawa in 1973, featured colourful abstract compositions of block-stamped geometric motifs. By 1976 his work had dramatically changed to spare, linear representations of birds and animals of great clarity and elegance, animated by a lively sense of humour and movement. Unlike other Aboriginal artists, Chee Chee denied that his images had symbolic meaning; they were rather "creatures of the present" whose forms expressed aesthetic concerns. At the height of his success, after a renewal of a long-term problem with alcoholism, he committed suicide in an Ottawa jail.