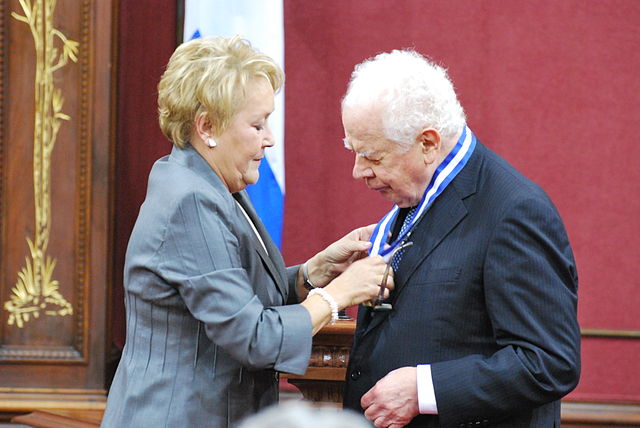 Bernard Lamarre, engineer and construction contractor (born 6 August 1931 in Montréal, Qc; died 30 March 2016 in Montréal). A 1952 engineering graduate of Montréal's École Polytechnique, Bernard Lamarre won an Athlone scholarship from the British government and studied at the Imperial College of Science & Technology and the University of London, where he received his Master's Degree in Engineering in 1955. He became a Fellow of the Engineering Institute of Canada in 1975.

In 1955, Lamarre began working at Lalonde & Valois, the parent company of the Lavalin Group. In 1962, he became an associate, and in 1972 president and CEO of Lavalin Inc., which became SNC-LAVALIN in 1991. Therefore, Lamarre headed one of the largest engineering construction firms in the world.

He has completed countless major projects in several world cities, while still finding time to promote the arts, entrepreneurship and engineering. Of note, he established the remarkable Lavalin Collection, now exhibited at the Musée d'art contemporain de Montréal.

In Montréal, the Louis-Hippolyte-Lafontaine Bridge-Tunnel, the ice control structure on the Champlain Bridge, the Ville-Marie autoroute, the Charles DesBaillets water treatment plant, the tower at 1000 de la Gauchetière, and the completion of the Olympic Stadium are examples of his professional work. In Africa, the Algerian government entrusted him with numerous construction sites including the Palais de la Culture and the Sanctuaire des Martyrs. In Canada and abroad, SNC-Lavalin has built many aluminum smelters, including those in La Baie and Bécancour in Québec, and Richards Bay in South Africa.

International contracts currently constitute SNC-Lavalin's principal activity, and Bernard Lamarre remained a consultant until August 1999. Since then, Bernard Lamarre has devoted most of his time to a private hospital the Groupe Bellechasse Santé, to the Old Port of Montreal Corporation where he is Chairman of the Board, and to several other boards of directors. He was President of the Ordre des ingénieurs du Québec from 1993 to 1997, and has received many honorary doctorates from Canadian universities. He is an Officer of the Order of Canada, and the Ordre du Québec (1985). With a five-year mandate beginning in 2002, Bernard Lamarre has occupied the position of Chair of the Board of Directors of l'École Polytechnique in Montréal.