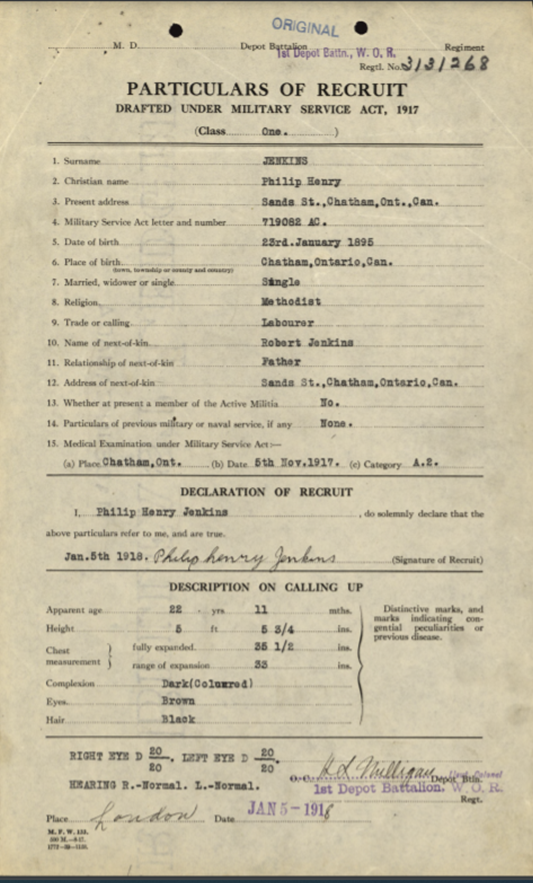 Researching Black Soldiers in the CEF

During the First World War, the Canadian Militia did not note servicemen’s ethnicity. This makes it difficult to identify Black servicemen in the records. The author has identified Black soldiers by comparing census documents from the 1901 and 1911 censuses and military service records of the First World War. The numbers provided in this article are therefore conservative; it is likely that more Black Canadians served in the CEF.

When the First World War started, many people expected it to be over quickly. But the war dragged on as the stalemate at the front lines consumed more and more men. Canada had started the war with one infantry division of 12 infantry battalions; by December 1916, it had four divisions at the front.

At first, voluntary enlistments kept up with the manpower requirements caused by deaths and injuries. In the first half of 1916, however, the number of volunteers began to drop, and it was not long before politicians raised the idea of conscripting men for military service. Although controversial, the Military Service Act was passed on 29 August 1917, requiring all male citizens aged 20 to 45 to register for military service.

Approximately 400,000 Canadians registered for service by the end of 1917, although most immediately applied for an exemption; thousands refused to register. In total, about 125,000 men were called up for service in the CEF and almost 100,000 were accepted. Approximately 48,000 were sent overseas, including more than 24,000 who served in France. The rest of the conscripted soldiers remained in Canada.

For the first two years of the war, Black Canadians found it difficult to enlist as volunteers. They were not, however, exempt from conscription. Despite the racism they faced when trying to volunteer, most Black men registered for service as required by the Military Service Act. Some, however, decided that if they were not good enough to be volunteers, they wouldn’t register for service. A few of these men were caught by police patrols and forced to register.

By the end of the war, at least 358 Black Canadians had been conscripted into the CEF (the actual number may be closer to 500). Of those drafted, 220 were sent overseas; most remained in the United Kingdom while 12 percent were sent to the front. In contrast, 50 percent of white conscripts sent overseas were sent to front-line units as reinforcements. Many Black conscripts served with CEF units in Canada because their medical category prevented them from serving at the front. Others were discharged as being medically unfitor mistakenly conscripted as they were American citizens.

Did you know?
New recruits received a preliminary medical examination upon enlistment. A more thorough exam followed later, which sometimes revealed medical conditions such as tuberculosis, lung problems, varicose veins or heart murmurs. While a few conscripts were discharged for medical reasons, many others received a Category C medical rating. This meant they were unfit for combat but could still do useful work, for example, in security, administrative and logistical services or training support.


Black conscripts began arriving in the United Kingdom as early as 23 January 1918. Their numbers increased, with at least 91 arriving in July. This included a group of 56 men who had been formed into a company in London, Ontario, to reinforce No. 2 Construction Battalion. They arrived on 22 July but never made it to the battalion, serving instead with the Canadian Forestry Corps (CFC).

While white conscripts were sent to reserve battalions to prepare them for service at the front, most Black conscripts were sent to the CFC Depot. This was a deliberate policy of Headquarters, Overseas Military Forces of Canada in London, England, who believed that their presence in reserve battalions was not desirable and was a source of trouble. By mid-1918, there were many Black conscripts at the CFC Depot. The CFC's logging operations had enough soldiers, though, so there was little work for the new arrivals.

This soon changed, when the Royal Air Force (RAF) asked the CFC to support their operations in Belgium and France in anticipation of the Germans being pushed back. The CFC formed seven companies to dismantle airfield buildings so they could be moved to new locations, and to repair and prepare other airfields, including captured German ones, as the RAF moved forward with the front lines. Two companies included a significant number of Black soldiers: in No. 8 Company, 169 of 180 soldiers were Black, while 15 percent of No. 7 Company was Black. Most of the soldiers were conscripts; however, some were volunteers, while others were members of No. 2 Construction Battalion who had remained in England.

While conscription was originally intended to provide reinforcements for front-line units, only 28 Black conscripts were sent to the front. The first Black conscript sent to France was Private Joseph Malott, who arrived on 15 March 1918 to serve with the 13th Battalion, Canadian Railway Troops. The largest group (14 men) was sent to France in mid-August 1918, during the Hundred Days Campaign. The Canadian Corps suffered heavier casualties during this campaign than at any other period of the war. Black conscripts were disbursed across front-line battalions; with three each in the 18th, 47th and 118th Battalions. Of the 28 men sent to the frontlines, three were killed during the 100 Days campaign. A further nine were wounded.

Philip Henry Jenkins, Howard Hesson and Stanley Hosey joined the 47th Battalion in mid-August. Both Hesson and Jenkins were wounded on 28 September during the attack on the village of Raillencourt, two of the 66 soldiers injured that day (another 15 were killed). Hesson received gunshot wounds to the upper right thigh and shrapnel wounds on the lower left leg. Jenkins suffered a gunshot wound to the cheek and returned to the unit three weeks later. Hesson and Jenkins were fortunate in that they suffered no lasting physical damage. Hosey, however, was killed on 1 November 1918 at the Battle of Valenciennes. The Battalion suffered 16 officers and soldiers killed that day plus another 119 wounded – over one-quarter of the battalion's strength.

When the Military Service Act made all male citizens subject to conscription in 1917, Black Canadians were not exempt. Earlier in the war, Black volunteers had found it very difficult to enlist in the CEF due to racist assumptions and attitudes. Despite this, most Black Canadians registered for military service and at least 350 were drafted into the CEF. The majority were assigned to the Canadian Forestry Corps, which also employed most Black volunteers. At least 28 Black conscripts served in frontline units during the Hundred Days Campaign, three of whom lost their lives. Although historians have debated the military value of conscription, these soldiers helped bolster the depleted divisions of the Canadian Corps in the final stages of the war. Like their white counterparts, Black conscripts helped bring an end to a war that claimed millions of lives, including at least 66,000 Canadians and Newfoundlanders.