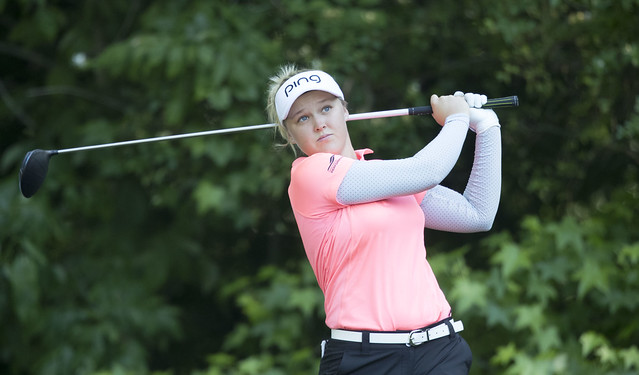 Brooke Henderson competes in the 2017 LPGA Kingsmill Championship in Williamsburg, Virginia. Henderson finished the tournament tied for 14th with a score of 5 under par.

Brooke Henderson is the youngest of two children of David and Darlene Henderson. Golf is a major part of the Henderson family, as David, Darlene, and Brooke’s uncle Tom Henderson all golf regularly. Brooke started playing golf at the age of three at the Smiths Falls Golf & Country Club, where her uncle Tom won the club championship 13 times. Brooke’s older sister, Brittany, currently serves as Brooke’s caddie.

Brooke’s passion for golf came at an early age. While in kindergarten, she would go to the driving range at the Lombard Glen Golf Club with Brittany during recess and lunch time. “I remember seeing her with that great big driver, way taller than she was,” said her former teacher Karen Donovan in an interview with Ken Warren of the Toronto Sun.

In an interview with Chris Stevenson of Flagstick.com, Henderson discussed her unconventional mechanics with the driver. She takes her driver farther back in her backswing than most golfers. When she first started golfing at age three, she always wanted to out drive Brittany. “She turned back far and she swung hard,” according to Stevenson, creating clubhead speed through the power in her core and legs. “Nobody ever really touched it or changed it and I’m really grateful they didn’t,” said Henderson. “It’s unique to me, but it works.”

Like many Canadians, Brooke was active in winter sports. She started figure skating and was a goaltender in the Smiths Falls Girls Hockey Association by the time she was eight. “To be a goalie, you have to be a little bit strange, a little bit odd,” she told Wendy Graves of Hockey Canada in an interview in 2018. “I built so many amazing friendships and my teams did pretty well. We had a lot of victories and some losses, but we took it together as a team. It really taught me a lot in many other sports.” Her father, David Henderson, was also a goaltender; he played for the Nepean Raiders of the Canadian Junior Hockey League in 1976–77.

By the time Brooke was 14, she realized she could no longer be a high-performance athlete in two sports and decided to concentrate on golf.

At the age of 10, Henderson finished 11th at the 2008 Quebec and Eastern Ontario Provincial Junior Championship in Sainte-Victoire-de-Sorel, Quebec (an event won by her sister, Brittany). Brooke also won the 2008 CN Future Links Ontario Championship in Stratford, Ontario. The following season, in 2009, Brooke won four junior golf tournaments in Ontario and was named to the Ontario Team Championship.

In 2012, at age 14, Henderson made history when she became the youngest golfer ever to win a professional golf tournament. Henderson’s win came at the CN Canadian Women’s Tour event in Beloeil, Quebec. She set the record at the age of 14 years, nine months and three days. Lydia Ko of New Zealand set the old record when she won the 2012 New South Wales Open at the age of 14 years, nine months and five days. Henderson also won the 2012 Canadian Junior Girls Championship in Calgary, Alberta. At age 14, she was the youngest competitor ever at the Canadian Women’s Open.

In 2013, Henderson became the first Canadian to win the South American Amateur Golf Championship near Bogotá, Colombia. She also made the cut as an amateur at the 2013 US Women’s Open in Southampton, New York, and was victorious at the Junior Orange Bowl in Coral Gables, Florida.

In 2013, Henderson once again had great success in Beloeil, Quebec. At the age of 15, she became the youngest person ever to win the Canadian Women’s Amateur Championship. She also won her second straight Canadian Juvenile Girls Championship.

In 2014, at age 17, Henderson was ranked as the world’s best amateur female golfer. Among her wins were three prestigious amateur golf events in the United States: the Women’s Porter Cup, the South Atlantic Women’s Amateur Championship and the Scott Robertson Memorial). While competing as an amateur at age 16 in Komoka, Ontario, Henderson became the youngest winner ever of the PGA Women’s Championship of Canada, and did so with a record championship score of 13 under par. She also won the Canadian Women’s Tour event in Niagara Falls and the Ontario Women’s Amateur Championship in Brampton. Henderson made the cut in four LPGA events and was the lowest-scoring amateur at the 2014 US Women’s Open, where she tied for 10th.

Henderson turned professional on 18 December 2014 at the age of 17. She turned down a scholarship from the University of Florida and signed with sports agency IMG. In 2015, she won two Suncoast Ladies Tour events in Florida and the Symetra Tour’s Four Winds Invitational in South Bend, Indiana. She also defended her title at the PGA Women’s Championship of Canada in Burlington, Ontario.

As a rookie, Henderson participated in various LPGA events as a qualifier or sponsor exemption. Her status changed in August when she became the second golfer ever to win an LPGA event after participating through Monday qualifying. Henderson was granted full LPGA membership after beating her nearest competitor by eight strokes at the Cambia Portland Classic. She became the third youngest champion in LPGA history (17 years, 11 months and six days) and became the first Canadian to win on the LPGA Tour since Lorie Kane in 2001. In December of 2015, Henderson won her first Bobbie Rosenfeld Award, presented to Canada’s female athlete of the year.

Brooke Henderson’s second LPGA title was a major championship. On 12 June 2016, she became the second Canadian woman to win a major title when she won the KPMG Women’s PGA Championship at the Sahalee Country Club near Seattle. The first was Sandra Post at the 1968 LPGA Championship. At 18 years, nine months and two days, Henderson became the second youngest female golfer ever to win a major title. Ironically, the youngest was Henderson’s playoff opponent at Sahalee, Lydia Ko, who was 18 years, four months and 20 days when she won the 2015 Evian Championship in France.

Henderson’s key shots at the 2016 Women’s PGA Championship in the fourth round were on the 11th and 17th holes. Her shot on the 11th hole was a 90-foot putt for an eagle and then on the 17th hole, Henderson made a clutch 36-foot putt for birdie, which helped her force a playoff. Also in 2016, Henderson defended her title at the Cambia Portland Classic and moved to second place in the World Golf Rankings — the highest a Canadian golfer has ever been ranked. 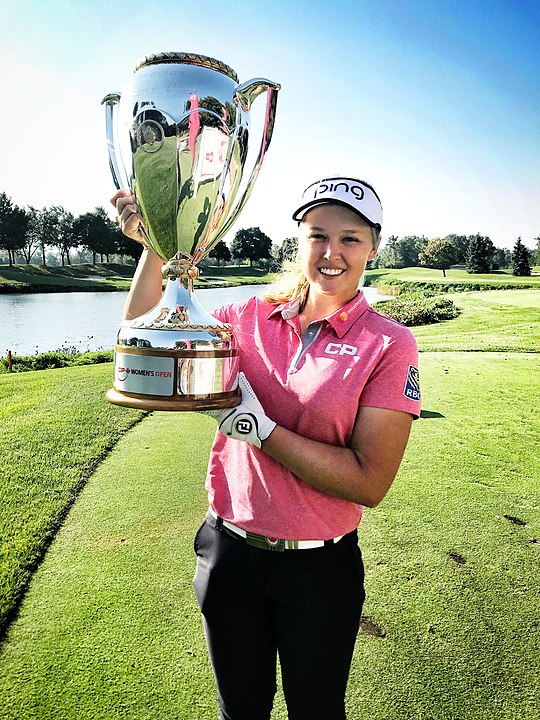 Brooke Henderson, after winning the CP Canadian Women's Open Championship at the Wascana Country Club in Regina, Saskatchewan, on 26 August 2018.

In 2017, Brooke Henderson won two LPGA tournaments for the second year in a row. In both events, she had a four-round score of 17 under par. Her first title of 2017 came at the Meijer LPGA Classic in Belmont, Michigan, where she beat American stars Lexi Thompson and Michelle Wie by two strokes. Then, on 2 October, Henderson won the McKayson New Zealand Open by five strokes over Jing Yan of China. In addition to her two titles, Henderson had eight Top 10 finishes (including a second place finish at the 2017 KPMG Women’s PGA Championship) and won her second Bobbie Rosenfeld Award in three years.

Henderson made golf headlines in 2018 when she became only the second Canadian ever to win the CP Women’s Open on 26 August. In a historic weekend at the Wascana Country Club in Regina, Henderson shot a four-round score of 21 under par to beat Angel Yin of the United States by four strokes. Henderson followed in the footsteps of Jocelyne Bourassa, who won the Canadian Women’s Open (then called La Canadienne) in 1973. Earlier in 2018, Henderson also won the LOTTE Championship in Hawaii. For the third time in four years, Henderson won the Bobbie Rosenfeld Award.

For the fourth consecutive calendar year, Henderson recorded at least two victories on the LPGA Tour. On 20 April 2019, she defended her title at the LOTTE Championship, and then on 16 June, she won her second Meijer Classic in three years. By winning the Meijer Classic, Henderson set the record for most wins by a Canadian on either the PGA or LPGA Tour with nine. On 10 July 2019, Henderson received the ESPY Award for best female golfer.