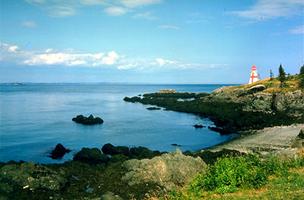 Lighthouse (Corel Professional Photos).
Campobello Island abuts the border with the US in PASSAMAQUODDY BAY, on the south coast of New Brunswick. Sovereignty over the ruggedly picturesque island was early in dispute, but passed to NB by convention in 1817. The first settlers were imported after 1770 by Captain William Owen, whose family owned most of the island for a century. The name is partly a reference to Lord William Campbell, who was governor of NS 1766-73, and partly descriptive of the place. Fishing has been the major activity, though it is most famous as the summer home of American President Franklin Delano Roosevelt.
×