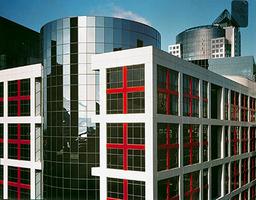 The dramatic centre was the result of 16 years of planning and design. It is one of Canada's most innovative buildings (courtesy CBC).

The Canadian Broadcasting Centre is the home of the CANADIAN BROADCASTING CORPORATION in Toronto. Located on Front Street West in the city's downtown, the centre is the result of a 12-year planning and design process and followed by a 4-year construction period before final occupancy in 1993. The building houses all the operations of the CBC's local and national English-language and local and regional French-language radio and television broadcasting services.

The Canadian Broadcasting Centre was developed as the result of a proposal call process in which the Cadillac Fairview Corporation Limited was selected to develop the 9.3 acre site, owned by the CBC, and build the centre, which was then leased to the CBC on a long-term basis. The Centre occupies the western portion of the site, while the eastern portion contains the Workman's Compensation headquarters building, a public park and space for residential and commercial use.

Radio and television facilities within the broadcasting centre incorporate the new professional digital technologies. With these new technologies, integration of future and more advanced digital technologies is possible to keep radio and television facilities up-to-date. The building's main interior public space, an enclosed atrium, is the centre's focal point and was named the Barbara FRUM Atrium to commemorate the contributions of this distinguished broadcaster, who died in 1992.