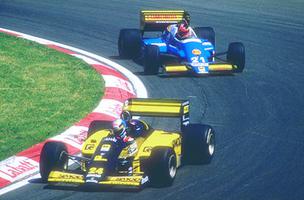 It all began on August 27, 1967 at the Mosport track in Ontario when Australian Jack Brabham at the wheel of his Brabham Repco, won the first Canadian Grand Prix. In 1968, the track at Mont-Tremblant, Québec welcomed the Formula 1 greats: New Zealander Denis Hulme led his McLaren Ford to first place. Returning to Ontario in 1969, the event made a final stop in Mont-Tremblant in 1970 when Belgian Jacky Ickx became the first driver to preserve his title. Jackie Stewart would repeat this accomplishment in 1971 and 1972 behind the wheel of his Tyrrell Ford, and by Michael Schumacher in 1999, 2000, 2002, 2003 and 2004.

From 1971 to 1977, (except 1975), the Canadian stage of the world circuit took place at Mosport. In 1977, Jody Scheckter, in his Wolf Ford, was the last Mosport champion. The drivers then refused to participate in the racing judging the track too dangerous. They liked the charm of this circuit mapped out in a hilly area, but realized that it no longer responded to the security norms inherent to the Formula 1. Europeans described the track as narrow, dangerous and "outdated", so Mosport was abandoned.

Since December 1977, there had been talk of a Canadian Grand Prix in Montréal and the construction of a track on the island site of the 1967 World's Fair, and on April 26, 1978, the Montréal executive committee approved the plan. Once the sanction of the F1 international magnates was received, construction on the track began on June 20, 1978. Designed by Roger Peart, a British engineer established in Montréal for nearly 20 years, the track was completed on September 22. Québécois Gilles VILLENEUVE, one of the F1 greats, was convinced that drivers would value a circuit that would make them work hard. Ever since then, the Grand Prix was held in Montréal, except in 1985, when it was cancelled following a legal dispute among the sponsors.

On October 8, 1978 22 of the best drivers on 5 continents took off in front of more than 72 000 spectators. One hour and 38 minutes later, the crowds on Île Notre-Dame went crazy. Gilles Villeneuve wrote a page in history: he was the first champion on Île Notre-Dame and had his first victory in 19 track events, all in view of his fans. This first year also saw the first Ferrari victory at the Canadian Grand Prix since 1970, and anticipated the greatest hopes for those in charge of the Grand Prix. In 1979 and 1980, Australian Alan Jones succeeded in two successive titles - a Montréal precedent. Gilles Villeneuve was among the leaders from 1979 to 1981, but the great champion was killed during the Grand Prix trials in Belgium on May 8, 1982. One week later, the City of Montréal administration gave Gilles Villeneuve's name to the track at Île Notre-Dame. A tragedy marked the 1982 Canadian Grand Prix: Italian Riccardo Paletti met his death at the start of this 5th annual event when his racing car hit two stalled vehicles head-on.

Most of the Formula 1 greats inscribed their names on the Montréal honour roll. The most glorified in the history of champions with 51 wins was Frenchman Alain Prost, who won in 1993. The record for victories belongs to German Michael Schumacher. He dominated the event in 2000, 2002, 2003 and 2004 before a record crowd of 105 000 each time, and won the Île Notre-Dame circuit event seven times, having also done so in 1994, 1997 and 1999. Brazilian Nelson Piquet has three victories to his credit and two other drivers each have two: Australian Alan Jones (1979 and 1980), and Brazilian Ayrton Senna (1988 and 1990). Belgian Jackie Ickx and British Jackie Stewart also won the Canadian Grand Prix twice before it stopped taking place in Montréal. The lap record went to Rubens Barrichello behind the wheel of his Ferrari in 2004 at 1:13.622.

As of 1978, F1 journalists boasted about the circuit built almost in the heart of Montréal in a pastoral and futuristic setting easily accessible by subway. The track was modified several times to make it safer and more competitive. It consists of an acceleration and braking track, with short straight sections to allow for passing and cutting in with sharp turns. Brakes and gears are put to the test throughout. In 2004, the anti-tobacco legislation in effect almost prohibited the event from taking place, however it was saved at the last minute by the stables and organizers who agreed not to advertise on cigarette brands.

The event consists of 66 rounds of the track on a circuit of 4427 kilometres.