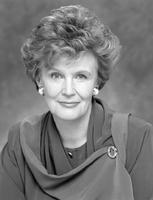 Callbeck was the first woman in Canada to be elected as Premier (PEI).

Catherine Callbeck, businesswoman, politician, premier of PEI (b at Central Bedeque, PEI 25 Jul 1939). Educated at Mount Allison (BComm) and Dalhousie (BEd), Callbeck briefly taught high-school business administration before becoming an executive with the family retailing business in PEI. In 1974 she ran as a Liberal provincially and won her seat. She served as both minister of health and social services and minister responsible for disabled people until 1978 when she resigned her seat to devote more time to the business. Callbeck also accepted a directorship with the Canadian Institute for Research on Public Policy.

In 1988 she returned to politics, this time at the federal level, winning the PEI riding of Malpeque for the Liberals. Following the resignation of PEI premier Joe Ghiz, Callbeck announced she wished to succeed him. In Jan 1993 she was chosen provincial Liberal leader and assumed the premiership of PEI, the second woman to head a provincial government in Canada. An election was called immediately after she took office and her Liberals were resoundingly returned to power. She resigned in August 1996 as polls showed that her government was declining in popularity. She cited a balanced budget, educational reform and the restructuring of the electoral system as her accomplishments.