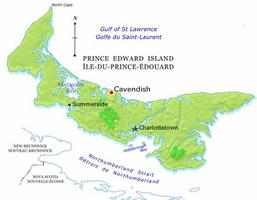 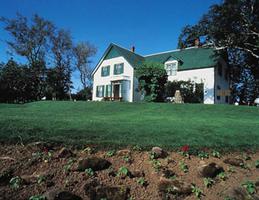 The shoreline of PEI alternates between headlands of steep sandstone bluffs and extensive sandy beaches (photo by Richard Vroom).
PreviousNext

Cavendish, PEI, Unincorporated Place within the resort municipality of Stanley Bridge, Hope River, Bayview, Cavendish and North Rustico. Cavendish is situated 38 km northwest of CHARLOTTETOWN, approximately in the middle of the province's North shore. It was named for Field Marshal Lord Frederick Cavendish, patron of a local landholder. During the summer months the year-round population is submerged by tourists and seasonal residents who flock to PRINCE EDWARD ISLAND NATIONAL PARK, one of Canada's most popular NATIONAL PARKS.

Established in 1790 by Scottish immigrants, Cavendish was originally a farming community. With the 1930s' establishment of the national park, TOURISM has become the community's principal employer. It was in Cavendish that novelist and native Lucy Maud MONTGOMERY wrote ANNE OF GREEN GABLES.