(This article is a plain-language summary of the Chinese Head Tax. If you are interested in reading about this topic in more depth, please see our full-length entry, Chinese Head Tax in Canada.)

Between 1885 and 1923, Chinese immigrants needed to pay the head tax. They needed to pay if they wanted to immigrate to Canada. The Canadian government wanted to discourage Chinese immigration. The head tax made it difficult for many Chinese people. Many could not bring their family with them to Canada. In 1923, Chinese immigration became illegal until 1947. The federal government apologized for the head tax in 2006. (This article is a plain-language summary of the Chinese Head Tax. If you are interested in reading about this topic in more depth, please see our full-length entry, Chinese Head Tax in Canada.) 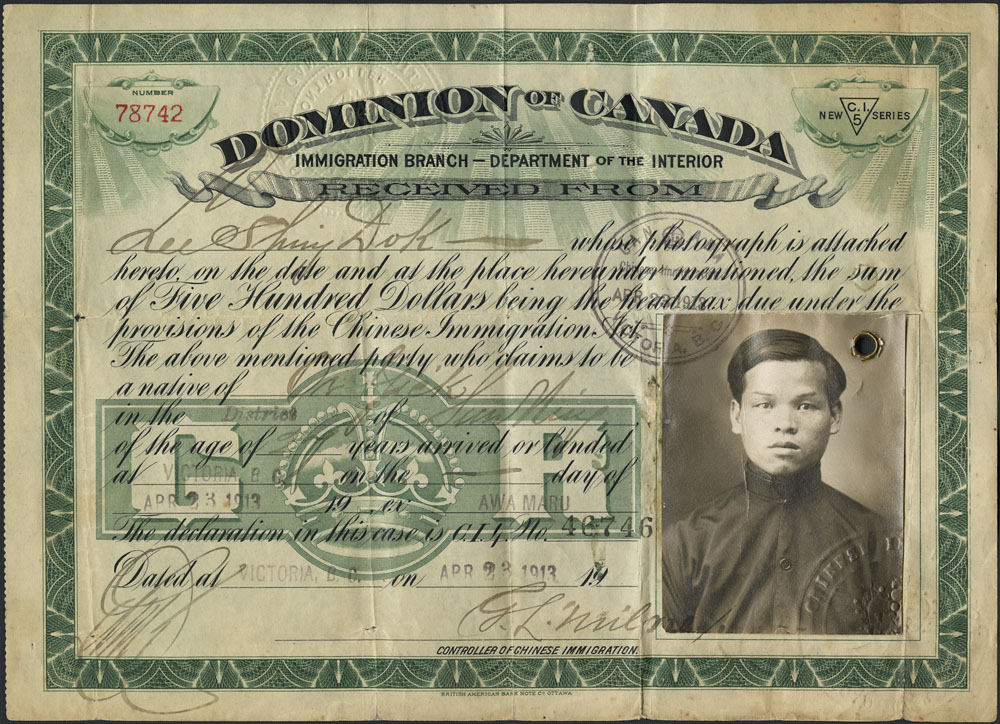 Chinese immigration to Canada began in the late 1850s. Most went to British Columbia. They came because of the Fraser River gold rush. In the early 1880s, about 15,000 Chinese workers went to British Columbia. They helped construct the Canadian Pacific Railway. In 1882, the government in BC tried to ban Chinese immigration. They did not want any non-European immigrants in BC. Prime Minister John A. Macdonald did not support the ban. He knew that the CPR needed Chinese workers. After the CPR was completed though he too wanted to stop Chinese immigration. Many other politicians felt the same. (See Immigration Policy in Canada.)

The Head Tax and the Chinese Exclusion Act

Discrimination and its Consequences

The Chinese were the only immigrants who paid a head tax. In addition to paying the head tax, they faced much other discrimination too. They could not vote. They could not practice law or medicine. They could not become politicians. And, they were discriminated against by members of the public in their daily lives. They were considered to be lesser than by a large percentage of members of mainstream Canadian society. (See Anti-Asian Racism in Canada.)

In 1947, the Chinese Immigration Act was cancelled. Since then, Chinese Canadians have sought redress. Redress means to right the wrongs of the past. Two important organizations which sought redress were the Chinese Canadian National Council (CCNC) and the National Congress of Chinese Canadians (NCCC). In 2006, Prime Minister Stephen Harper apologized to the Chinese who paid the head tax and their families. In 2009, Canada compensated $20,000 to around 800 head tax payers or family members. In 2008, the government created Canada’s Community Historical Recognition Program. These are just the first steps toward trying to heal the wounds of the past.