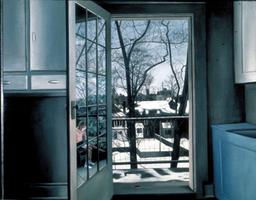 Christiane Pflug, painter (b Berlin, Germany 20 June 1936; d at Toronto Apr 1972). War forced her mother, a knit designer, to put her young daughter in foster homes, where she was forced to stay until she was 12. In 1953 Christiane went to Paris to study fashion design, but she soon became uninterested in this. However, there she encountered Michael Pflug, a young medical student who had art training, and he suggested that she paint outside. In the spring of 1954 she painted her first heavy gouaches depicting Parisian cityscapes, a self-portrait and a few still lifes. In 1956 Christiane and Michael were married and moved to Tunis, where Christiane produced arresting still lifes. Working in tempera, she painted strong and simple works which reflected a new inward vision. Bird Cage with Pears and Tunisian Interior relate directly and poignantly to her contemporary psychological and physical state.

In 1959 Christiane moved to Canada, where her mother now lived. Living in downtown Toronto, she painted her first landscapes, then interiors, concentrating on her daughters' dolls. On the Black Chair II is a strong early example. The dreamlike doll scenes culminated in 3 portraits of her 2 daughters and her dealer, Avrom Isaacs. The surreal quality of this work is especially apparent in Kitchen Door with Ursula (1965), where winter is depicted through the open door but spring is reflected in the window panes.

In 1967 the Pflugs moved to Birch Avenue, opposite the Cottingham school. Now Christiane painted the view from her window, the Cottingham school and the background of new city highrises. By 1971 in With the Black Flag, a black Canadian flag waves against a growing and engulfing city. Unreal clarity predominates. Pflug defined her aim as an attempt "to reach a certain clarity which does not exist in life." In April 1972 Christiane Pflug committed suicide.