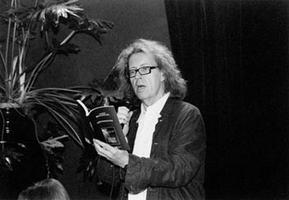 Prolific writer and critic Claude Beausoliel has been carrying out formal research into language using contemporary theories since the 1970s (photo by Danielle Schaub).

Claude Beausoleil, professor, writer and literary critic (b at Montréal 16 Nov 1948). After a BA (1970) and MA (1973) in literary studies at the Université du Québec à Montréal, he received his certificate in art history and took more courses at the Centre international de linguistique et de sémiotique d'Urbino in Italy (1978). Professor in the department of French at the Édouard-Montpetit CEGEP, he has also been literary critic for Mainmise (1975-77), Hobo-Québec (1973-79), Le Devoir and the magazine Spirale; he has had his manuscripts published in many reviews, including Lèvres urbaines, which he founded in 1983.

A prolific author, Beausoleil has published more than 25 titles since his first book, Intrusion ralentie, appeared in 1972, and he received the Prix Émile-Nelligan (1980) for his collection Au milieu du corps l'attraction s'insinue. Since the early 1970s, Beausoleil has been carrying out formal research into language, using contemporary theories such as structuralism and psychoanalysis.