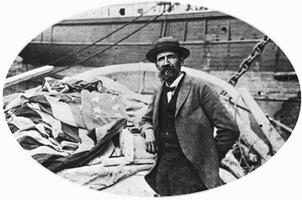 Joshua Slocum, sea captain and author (b at Wilmot Township, NS 20 Feb 1844; d at sea sometime after 14 Nov 1909). Largely self-educated, Slocum began his deep-water career at 16, gaining experience in the American, European and Far Eastern trades. A peripatetic mariner, adventurer and sometime shipbuilder, he moved fluently among vessels, ports and cargoes; his family regularly accompanied him. His Voyage of the Liberdade (1890) and Voyage of the Destroyer (1894) highlight his early career. In 1893, having fallen on hard times in New England, Slocum rebuilt a derelict oyster sloop, the Spray, intending to sail it alone around the world - one of the few great marine challenges then remaining. The Spray was 36´9´ long, 14´2´ wide, 4´2´ deep, and at just under 13 tons gross, it "sat on the water like a swan." Slocum left Boston, Mass, on 24 Apr 1895, and after a voyage exceeding 46,000 miles, reached Newport, RI, on 27 June 1898. Sailing Alone Around the World (1900) is an eloquent account of this voyage, and remains a classic in seafaring literature. The Slocum Society (US) perpetuates his memory, but in Canada his achievements have received little attention, other than a plaque erected in his boyhood community of Westport, Brier Island, NS.