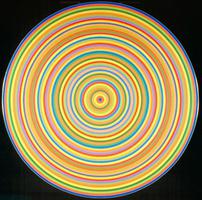 Claude Tousignant, painter (b at Montréal 23 Dec 1932). Tousignant studied at the School of Art and Design, Montreal Museum of Fine Arts, with Jacques de TONNANCOUR and Gordon Webber (1948-52). From his earliest works his intention was to make purely abstract paintings in which nothing interfered with the viewer's sensation of colour. He chose a circular format in which sequences of colour produce a dynamic optical effect. During the early 1980s, without abandoning abstraction, he began making paintings composed of a single colour, built to stand away from the wall on which they are hung. Throughout his career, he has also produced sculpture, exploring simple geometric forms and often bright colour.

Tousignant was a member of the Association des artistes non-figuratifs de Montréal and, with MOLINARI and LEDUC, was a major force in the continuing development of abstraction in Montréal. His work has been shown extensively in Canada and internationally. In 1965 he represented Canada at the 8th Bienal de São Paulo and in 1973 the NATIONAL GALLERY OF CANADA mounted a retrospective of his work. Claude Tousignant: Sculptures was organized by the MUSÉE DES BEAUX-ARTS DE MONTRÉAL in 1982; and Claude Tousignant: monochromes, 1978-1993 was presented at the MUSÉE DU QUÉBEC in 1994. In 2009 Tousignant was the subject of a major retrospective at the MUSÉE D'ART CONTEMPORAIN DE MONTRÉAL.

Claude Tousignant was the recipient of the Victor Martyn Lynch-Staunton Award (presented by the CANADA COUNCIL FOR THE ARTS for outstanding achievement by mid-career artists) in 1974, and the Prix Paul-Émile-Borduas (the highest visual-arts prize awarded by the Québec government) in 1989. He was also appointed an Officer of the ORDER OF CANADA in 1976 and in 2010 was named a winner of the Governor General's Award in Visual and Media Arts.