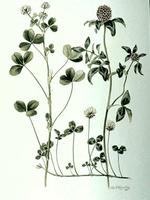 Some clovers are low and trailing, others grow to 1 m (artwork by Claire Tremblay).

The "true" clovers (genus Trifolium) are herbaceous plants of the pea family Leguminosae or Fabaceae (see legume) and must be distinguished from bur clovers (Medicago) and sweet clovers (Melilotus) of the same family.

The genus Trifolium contains about 240 species worldwide, occurring naturally in Eurasia (particularly the Mediterranean region), parts of Africa and eastern and western North and South America. White clover is found throughout most temperate regions where it is widely introduced. Clovers are annuals, biennials and perennials and vary enormously in habit. This is an adaptation to a wide range of habitats.

Nearly 20 European species are grown for forage in America and Australia, where they are not native. In Canada, red clover (Trifolium pratense), white or Dutch clover (T. repens) and, to a lesser extent, alsike clover (T. hybridum) and crimson clover (T. incarnatum) are grown. Many short-lived, perennial cultivars of red clover bred for special qualities exist. Most clovers are associated with nitrogen-fixing bacteria (Rhizobium).