Collegiate Gothic and Other Revival Styles in 20th-Century Canadian Architecture 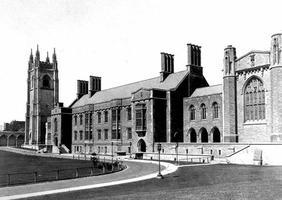 Collegiate Gothic and Other Revival Styles in 20th-Century Canadian Architecture

The preferred stylistic option for early 20th-century Canadian architects was the Classical Revival style, but other revival styles became popular in Canadian ARCHITECTURE, particularly between the world wars. Among the most significant styles for Canadian architecture was the Collegiate Gothic, which was first developed in the United Kingdom and shortly thereafter became a mainstay on American and then Canadian university campuses.

From the 1880s, architects found late Gothic precedents appropriate for use in modern contexts. In Canada, an excellent example of the Collegiate Gothic style is HART HOUSE on the University of Toronto campus, one of the earliest and most comprehensive undergraduate student centres in North America. Its exterior is in the Collegiate Gothic style. The building was named after Hart MASSEY, an Upper Canada manufacturer and philanthropist who took over his father's Newcastle Foundry and turned it into one of the world's largest farm implement companies, the Massey Manufacturing Company. Hart House was designed by SPROATT AND DARLING, whose firm also designed the Arts & Letters Club in Toronto in this style; it is a building notable for its hammer-beamed interior.

University Hall at McMaster University in Hamilton, designed by W.L. Somerville with J. Francis Brown and built in 1929-30, provides another example of the Canadian Collegiate Gothic style. At the University of Western Ontario in London, several buildings were designed in this style from the 1920s to 1960. In the 1920s, the Arts Building (now University College) and the Natural Science Building (now the Physics and Astronomy Building) were both designed in the Collegiate Gothic style, as was the distinctive University College tower (later renamed Middlesex Memorial Tower). The style was employed as late as 1960 when Middlesex College, with another distinctive tower, was constructed. In Montréal, Harold Lea Fetherstonhaugh designed Divinity Hall at McGill University (known since 1972 as the William and Henry Birks Building) in the Collegiate Gothic style.

Western Canadian examples of the Collegiate Gothic include Saskatchewan Hall (1910) at the University of Saskatchewan campus in Saskatoon, and its College of Agriculture (1910-12) and the Administration Building, all designed by architects Browne and Valance.

On the West Coast, the University of British Columbia campus shows Collegiate Gothic elements, for example, the Science Building, 1914-25. The architects for this were George L. Thornton Sharp and Charles J. Thompson, two English-trained architects who won a competition to design the buildings of the campus. Point Grey Secondary School (Tinley and Matheson) in Vancouver is another late example of the Collegiate Gothic on the West Coast.

The Collegiate Gothic was a popular style, but it was not the only revival style that Canadian architects and clients found palatable. The Tudor style was employed at the Banff Gates (Harold C. Beckett, 1934) and the Byzantine Revival style can be seen at the Royal Ontario Museum in Toronto (Chapman and Oxley, 1931-32).

Chapman and Oxley employed the Romanesque style in synagogue architecture in the Holy Blossom Temple (1936-37). Jewish congregations employed this style in part to assert independence from Gothic Revival and Classical styles, which were associated with Christian denominations. Holy Blossom is an important example of the use of a reinforced concrete frame, which permitted an interior uninterrupted by structural columns.

By the 1940s, Modernism had mostly displaced revival styles. It was not until the postmodern period (1980s to the present) that references to historic architecture again made their way into Canadian architectural practice. For the Joseph S. Stauffer Library (1994) at Queen's University in Kingston, Ont, Kuwabara Payne McKenna Blumberg Architects used stone facing and massing in the tradition of the Collegiate Gothic. The new library, with spiky buttresses that recall Gothic architecture, is clad in limestone to fit with existing campus buildings such as Grant Hall or the Douglas Library, but is clearly of the contemporary period.

The Collegiate Gothic provides a good example of a Canadian architectural style consciously employed to invoke positive connotations - in this case, of education, tradition and refinement. As such, it has played a major role on Canadian university campuses and may well continue to do so in future new construction.