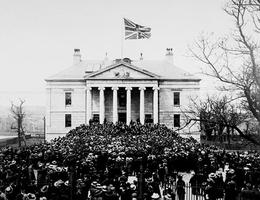 In 1832 Newfoundland was granted representative government, but a permanent home for the legislature was delayed. Finally in 1847 the cornerstone for the Colonial Building was laid, though it was not until 1850 that it was completed and Newfoundland's legislature began to meet there. The building was designed by James Purcell and features a neoclassical facade with a portico, ionic columns and a large triangular pediment. It was constructed using white limestone imported from Cork, Ireland, at considerable expense. The interior of the building was also finished with an eye to style and features 2 legislative chambers that once housed the elected legislative assembly and the appointed legislative council.