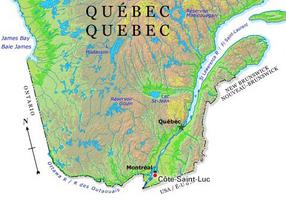 Côte-Saint-Luc, Qué, City, pop 31 395 (2006c), 30 244 (2001c), inc 1951. Côte-Saint-Luc is located 16 km southwest of MONTRÉAL on Île de Montréal. "Côte," in the name of this city, is a throwback to the old SEIGNEURIAL SYSTEM when those living along a shoreline or inland on a country road would be designated as living on a specific côte. The name Saint-Luc quite probably reflects the role played by a French officer, merchant and interpreter, Luc de La Corne Saint-Luc (1711-84) who lived in Montréal during the French Regime.

Côte-Saint-Luc, originally settled in the 18th century, remained a farming community until the middle of the 20th century. In 1818, the total population of the community was 209; in 1940 it had only reached 747. Immigration after WWII radically changed the village municipality's (1903) demographic character. By 1975 the population rose to over 25 000. Today, this largely residential city is English-speaking (58.3%, 1991c) with a large Jewish community.