An accurate and useful definition of contemporary crafts is unattainable, partly because the concepts underlying crafts are changing and partly because the word is used in 2 different senses. The root meaning (Ger kraft, "strength") is the skilful application of force, yet, in ordinary speech, the words "art" and "craft" are sometimes used interchangeably to mean a highly skilled occupation, as in the art of cookery or the craft of poetry. As a term for objects, crafts is largely a 20th-century usage; in the 19th century such artifacts were called applied, decorative or ornamental arts, terms that usually meant utilitarian objects that were a pleasure to the senses and showed high skill in execution.

Unfortunately, the Victorians' love of excessive decoration brought the decorative arts and their producers into disrepute. It was not always so: many of the greatest artists of the Renaissance were trained as goldsmiths and applied their skills equally well to the design of tapestries, goblets, stage sets and more.

By the beginning of the 20th century, crafts had become "handicrafts," ie, products of cottage or home industry. This definition still applies in the Third World, where crafts are still a matter of tradition, handed down from parent to child. Side by side with the large demand for utilitarian objects (eg, baskets, pots, boxes) there has always existed a luxury market, ie, objects required for religious or ceremonial purposes or used by the wealthy. This division still exists everywhere. In Europe, N America and Australasia the luxury market often involves objects of "art," ie, unique objects serving a purely aesthetic function, which are made in traditional craft media (eg, clay, fibres, wood, Glass, metal, Leather).

The 1950s and 1960s saw an upsurge in the number of people producing crafts for a livelihood. In part, this growth was an extension of the self-sufficiency movement of those years. That trend continues today, partly enforced by the significant increases in unemployment, particularly in the Atlantic region. Many of the unemployed seek a living from crafts, and this is increasing demands for training. Concurrently the number of hobbyists and "do-it-yourselfers" has increased.

Various surveys in Canada indicate that over 1.5 million people spend more than 7 hours per week on a craft; the 1991 census suggests that about 16 000 people derive their principal income from making and selling craft items. The retail value of domestically produced crafts in Canada is about million per year. The market for well-made, well-designed things, which express the individuality of the purchaser as well as the producer, has also expanded.

In Canada, most raw materials used in crafts (eg, cotton, silk, jute) are imported; the growing of hemp (the source of marijuana and hashish) was banned half a century ago. Recently, concern has arisen about the use of materials from endangered species (eg, various skins, ivory), but most craft materials are still the traditional ones. Newer substances have given rise to health concerns: craftspeople and hobbyists have unknowingly been put at risk by using solvents, varnishes, glazes, pigments, plastics and additives that have been found to be dangerous. However, craftwork also has considerable therapeutic value. Occupational therapists have long recognized the value of handiwork in rehabilitation, and millions of people all over the world simply derive satisfaction and pleasure from working with their hands.

Traditionally, crafts were taught by Apprenticeship or by transmission of skills from parents to children. Various new movements in education led to the use of traditional craft materials (eg, clay) in primary education, but as a means of self-expression, not to instill basic training in the medium. Formal education in craft techniques hardly existed in Canada before the boom in the construction of Community Colleges in the late 1960s. For example, in Ontario a school of crafts and design was founded and attached to Sheridan College, although the school was residential and intended to teach crafts and design to all Ontario students. There is also considerable demand for evening classes and summer courses teaching the basic skills. In times of economic hardship, schools of crafts and design that are not autonomous are finding their programs being cut and suspended, sometimes whole departments, and, in one case in BC, an entire college. Despite the demand for training, the trend to close down facilities continues.

Modern communications have largely destroyed the distinctive provincial or regional craft styles that once prevailed in Canada. Québec and Newfoundland probably have the greatest claim to distinction, as certain traditional styles have not yet been widely copied, eg, ceinture fleché weaving and hooked rugs, respectively. Some provinces have established a particular name, eg, Nova Scotia is well known in Canada and the US for Quilting. But Ceramics are extensively produced in every province, Weaving and surface printing are taught everywhere and there is little distinction between one region and another. Even less-common crafts (eg, glassblowing) still share an international style. In Canada as a whole, the most advanced work internationally is probably being done in glass, ceramics and fibre/textiles, but these media are not the prerogative of any particular province, although Québec and Ontario, being the largest provinces, also have the greatest number of craftspeople, followed closely by British Columbia.

Because the basic skills of many crafts are quickly learned, many amateurs attempt to sell what they make. The consequences are an undercutting of the professional market and a deterioration of standards. Craft organizations have long played an important role in maintaining standards of quality in design and production. In 1902, in part as a result of the general interest in handicrafts aroused by the art nouveau movement, the Women's Art Association succeeded in setting up a shop in Montréal. The group was chartered in 1906 as the Canadian Handicrafts Guild (later renamed the Canadian Guild of Crafts). The objectives of the guild are to encourage, revive and develop crafts; to aid craftspeople in marketing; to undertake and participate in exhibitions; to provide craft instruction; and to educate the public in the value of crafts and good handiwork. At the request of Sir Wilfred Grenfell the guild set up craft centres in Labrador. In Newfoundland, the Outport Nursing Committee (fd in 1920) established a service whereby local women could help pay for nursing and medical care by knitting and weaving goods that were later sold. The trademark for the goods produced later became "NONIA" to reflect the group's new name (Newfoundland Outport Nurses' Industrial Assn).

From its beginning, the guild was interested in Indigenous crafts. In 1930 they held a major exhibition of Inuit work in Montréal. In 1933, they formed a committee to help renew Aboriginal Arts; in 1940, they were asked to include Inuit Art as well. In 1948-49 they appointed James Houston as their Arctic representative, and it was largely his work that led to a renaissance of Inuit art.

Every province and territory has a major craft organization. There are about 9000 professional members belonging to the provincial associations in such varied disciplines as wood, ceramics, textile printing and soft sculpture, metal jewellery, leather, skins and engravings. There is one national body, the Canadian Crafts Federation. If these organizations are still devoted to the aims that stimulated the Canadian Handicrafts Guild in 1906, it is not because they have failed to learn from history but rather because the problems of that time are still with us today. 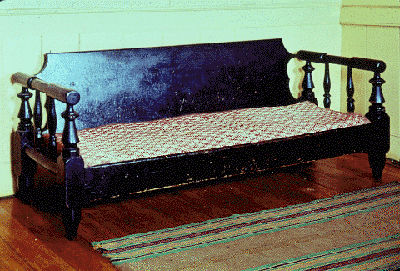