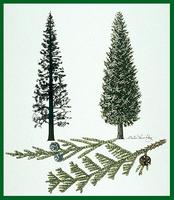 The yellow cypress is the only member of the cypress family in Canada. Shown with young cones (top), older cones (right) and male flowers (artwork by Claire Tremblay).\r\n

Cypress is the common name for evergreen conifers of genus Cupressus of the cypress family (Cupressaceae). At least 12 species are recognized worldwide occurring in warm, northern temperate regions. The yellow cypress (Chamaecyparis nootkatensis) occurs in a narrow band from Alaska, along the BC coast and in the Cascade Mountains into northern California. There is some dispute on the taxonomy of this species, with some authorities placing it in Cupressus and others arguing for returning it to an older name, Callitropsis nootkatensis, or including it in a new genus Xanthocyparis.

The yellow cypress is also known as the yellow cedar but this is a misnomer as Canada's 2 species of cedar are in the genus Thuja. Other conifers also commonly called cypress belong to the genus Taxodium and are not native to Canada. An example is the bald cypress found in swampy areas of the southeastern United States.

The yellow cypress is a medium-sized tree, usually 20 to 40 m in height and 1.5 m in diameter. Its leaves are small and scalelike; the cones are round (1 cm diameter), and the bracts (modified leaves) and scales (ovule-bearing structures) are fused. Pollination occurs in spring. The seeds are small with 2 lateral wings. They complete their development and are shed in the fall of the second year after pollination. The wood is light, hard, strong and decay-resistant.

Its species name nootkatensis refers to Nootka Sound from where it was first collected by botanists. Nootka Sound is the ancestral land of the Nuu-Chah-Nulth. They fashioned its wood into paddles, masks, dishes and bows, and wove its bark into clothing and blankets. This tree remains important to their culture.