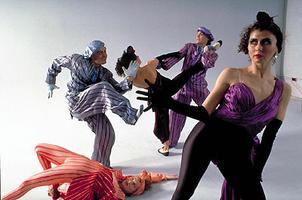 The Danny Grossman Dance Company was founded in Toronto in 1977 by American-born dancer and choreographer Danny GROSSMAN as a platform for his own choreography. In total, the company has presented 36 works by Grossman, from solos to large ensemble pieces. Like many choreographers in the first phase of their creative career, Grossman produced a steady stream of successful works. Although varied in theme, they were marked by a distinctive movement idiom, directness of purpose, theatricality and a humanistic viewpoint that made them appealing to a broadly based audience. The popular appeal and accessibility of Grossman's work can also be attributed to his musical tastes. These, particularly his love of jazz, have generally been mainstream compared with more experimental, avant-garde choreographers. Grossman's choice of dancers has also been unusual in that he tends to place more emphasis on strong personality than the traditional dance values of body shape and technique. His dancers project an earthy quality that connects with audiences in an appealing way.

During its heyday the company toured extensively at home and in Europe, Israel, South America and the United States, and became one of Canada's most popular modern-dance troupes. Grossman, meanwhile, also staged and created works for such companies as the NATIONAL BALLET OF CANADA, LES GRANDS BALLETS CANADIENS, THEATRE BALLET OF CANADA and the Paris Opera Ballet.

The general shrinking of government arts funding during the 1990s affected the company's ability to tour and sustain lengthy seasons. At the same time Grossman produced new works at a slower rate. In order to maintain variety in the repertoire, he therefore began to include other modern-dance works that he considered of value and at risk of being lost. Among the Canadian choreographers whose works have been revived by the Grossman troupe are Paula ROSS, Judy JARVIS, Patricia BEATTY, Anna Blewchamp, Peter RANDAZZO, Lawrence GRADUS and Robert DESROSIERS. This new curatorial approach has helped strengthen and diversify the repertoire, and has given the company a new sense of purpose.

Sadly, the revivals of important works of Canadian choreography did not garner enough financial support. Beginning in 2005, the Danny Grossman Dance Company transitioned from a performance-based company to an institute for the licensing and teaching of the Grossman repertoire. The company stopped performing in 2008. The artistic staff now travels to the dance departments of schools such as Adelphi University to teach a selection of more than 20 masterworks, primarily by Grossman.