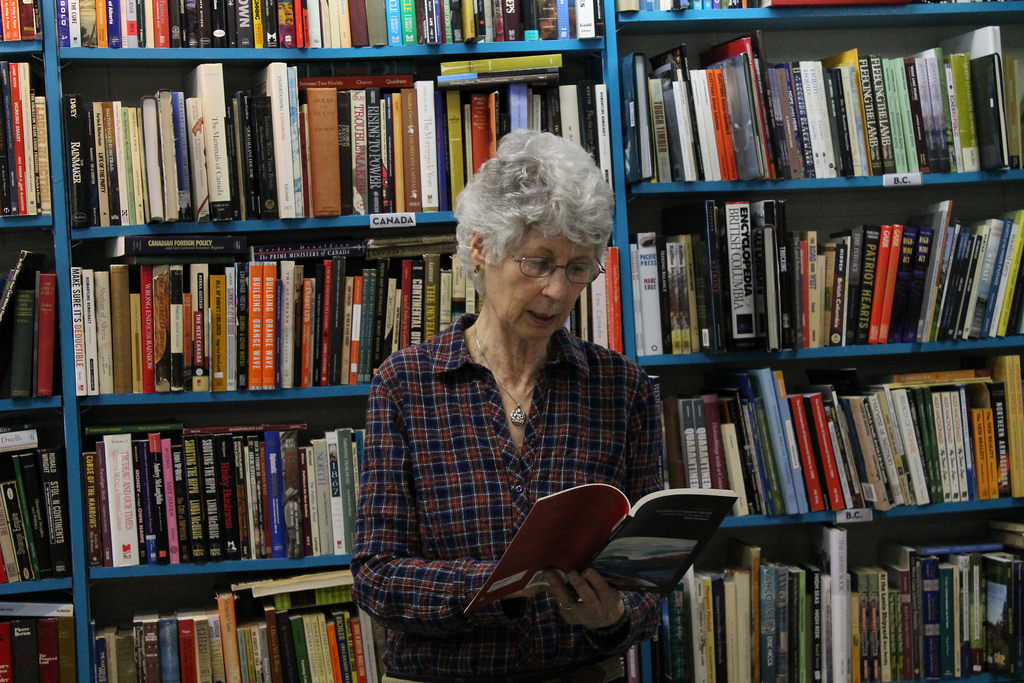 Daphne Marlatt (née Buckle), CM, poet, novelist, editor, playwright (born 11 July 1942 in Melbourne, Australia). A Member of the Order of Canada, Marlatt is known for exploring the interplay of biography, the environment and feminism in her work.

When Marlatt was three years old, her family moved from Australia, to Penang, Malaysia; when she was nine, her family moved again, this time to Vancouver, British Columbia. The complexity of how one's environment shapes biography has informed her imagination ever since. She attended the University of British Columbia,where in 1963 she participated in the first iteration of the TISH: a poetry newsletter, whose open poetics became the base approach from which her later feminism could grow. In 1964, she graduated with a BA in creative writing. She was also a participant, along with George Bowering, Fred Wah and many others, in the influential 1963 Vancouver Poetry Conference. After completing an M.A. in literature in the United States at the University of Indiana in Bloomington, she returned to British Columbia, where she has mostly lived and worked since 1970.

In its insistence upon the particulars of perception, Marlatt's writing has sought to represent the flux of existence; as a result, her densestyle has sometimes proved difficult to the uninitiated. Early recognized as an innovative new writer, she published her first book,Frames of a Story, a poem-fiction based onthe Hans Christian Anderson fairy tale The Snow Queen, in 1968. The extraordinarily compressedleaf leaf/sfollowed in 1969. Her first long poem exploring her personal relation to local history, Vancouver Poems(1972), appeared soon after.Steveston(1974), with photographer Robert Minden, became one of her most admired early long poems, a carefully documented and deeply personal overview of the town in history. Much later in her career, In 2008, she produced the CD Like Light Off Water, Otter Bay, which has Marlatt reading passages from Steveston accompanied by music composed by Minden and Carla Hallett.

An editor withThe Capilano Review, periodics and Island, she also compiled and edited material for two documentaries for the BC Provincial Archives:Steveston Recollected(1975) andOpening Doors: Vancouver's East End (1979). Over the course of the 1970s and 1980s, she published many books, including Zócalo (1977), Selected Writing: Net Work (1980), edited by Fred Wah, How Hug a Stone (1983) and Touch to My Tongue (1984), all of which express her intense apprehension of the continually changing world.

The last of these was also a love poem declaring both her coming out as a lesbian and her relationship with activist and writer Betsy Warland. With her deepening feminism, she became one of the founding editors of Tessera, a Canadian journal of feminist theory and writing. In 1983, she helped to organize the first Women and Words conference in Vancouver, which united writers from both English- and French-speaking Canada. In 1988, she published Ana Historic, a novel involving a contemporary writer in the historical life she is researching, and Double Negative, a long poem written with Betsy Warland about their travels in Australia. In 1994, she and Warland publishedTwo Women in a Birth, a collection of their collaborations, includingTouch to My Tongueand Warland'sOpen Is Broken (1984), Double Negative, Reading and Writing Between the Lines (1988) andSubject to Change (1991).

Salvage(1991) collected poems of two decades that charted the many changes her life had gone through. Like so much of her work, these demonstrate how that open, searching poetics first discovered with theTISHgroup allowed her to construct a number of serial poems and novels in which she could explore her own life as itself an organic form, creating something both deeply autobiographical and carefully inscribed within each text as text.Ghost Works(1993) collected three important out-of-print works, Zócalo, Month of the Hungry Ghosts (1979), andHow Hug a Stone. This Tremor Love Is(2001) is a sequence of love poems covering 25 years, with the final poem dedicated to her new partner, Bridget Mackenzie. Seven Glass Bowls appeared in 2003.

Taken(1996), her second novel, offers its narrator's exploration of her mother's life in wartime Australia with her husband gone to fight, even as she experiences the absence of her own lover during the Gulf War. And although presented as a long prose poem,The Given (2008), which won the 2009 Dorothy Livesay Poetry Prize, reads as a similar kind of narrative, in which a mother's death leads the narrator into complex memories of life in 1950s Vancouver. Her playThe Gull, the first Canadian play staged in the ancient, ritualized tradition of Japanese Noh, won the prestigious 2008 Uchimura Naoya Prize. As with so many of her works, Marlatt draws on what are clearly personal memories while weaving them into a complexly rendered textuality that complicates any simple autobiographical reading. Much of the theorizing behind such a continuing poetics can be found in the essays collected inReadings from the Labyrinth (1998).

Daphne Marlatt’s most widely influential work may be Vancouver Poems. Though other poets have written tributes to Vancouver, such as George Bowering’s George, Vancouver (1970) and George Stanley’s Vancouver: A Poem (2008), Marlatt’s cycle of poems is distinctive for its pure lyricism and the way it evokes the Indigenous origins of the region as well as the complex multicultural forces that have shaped the city. Vancouver Poems was a book about a relatively young city that was in the process of change but still retained its feeling of being a fogged-in port town that smelled of fish and the sea and still had old wooden houses and staid Edwardian buildings:

public library steps, the gulls. Mean what they

cry. Time, time. How many stoops to a dead fish?

How would you like a tail in the eye, scales, a

little rheumy but other/wise…Off the point

they go fishing. Under latches of the bridge,

deep there. Noon reigns with the street, a White Lunch.

In a remarkable and in many ways unprecedented gesture, almost 40 years after the original publication of Vancouver Poems, Marlatt published Liquidities: Vancouver Poems Then and Now (2011). Liquidities contains both substantially revised versions of poems in the original book and new poems, but its central theme is not just that 21st-century Vancouver is a city in the process of transformation but that it is a city governed by high finance (“liquidity”) and big cargo ships, big high rises, and astronomical housing prices that are erasing the city’s Indigenous and multi-cultural heritage.