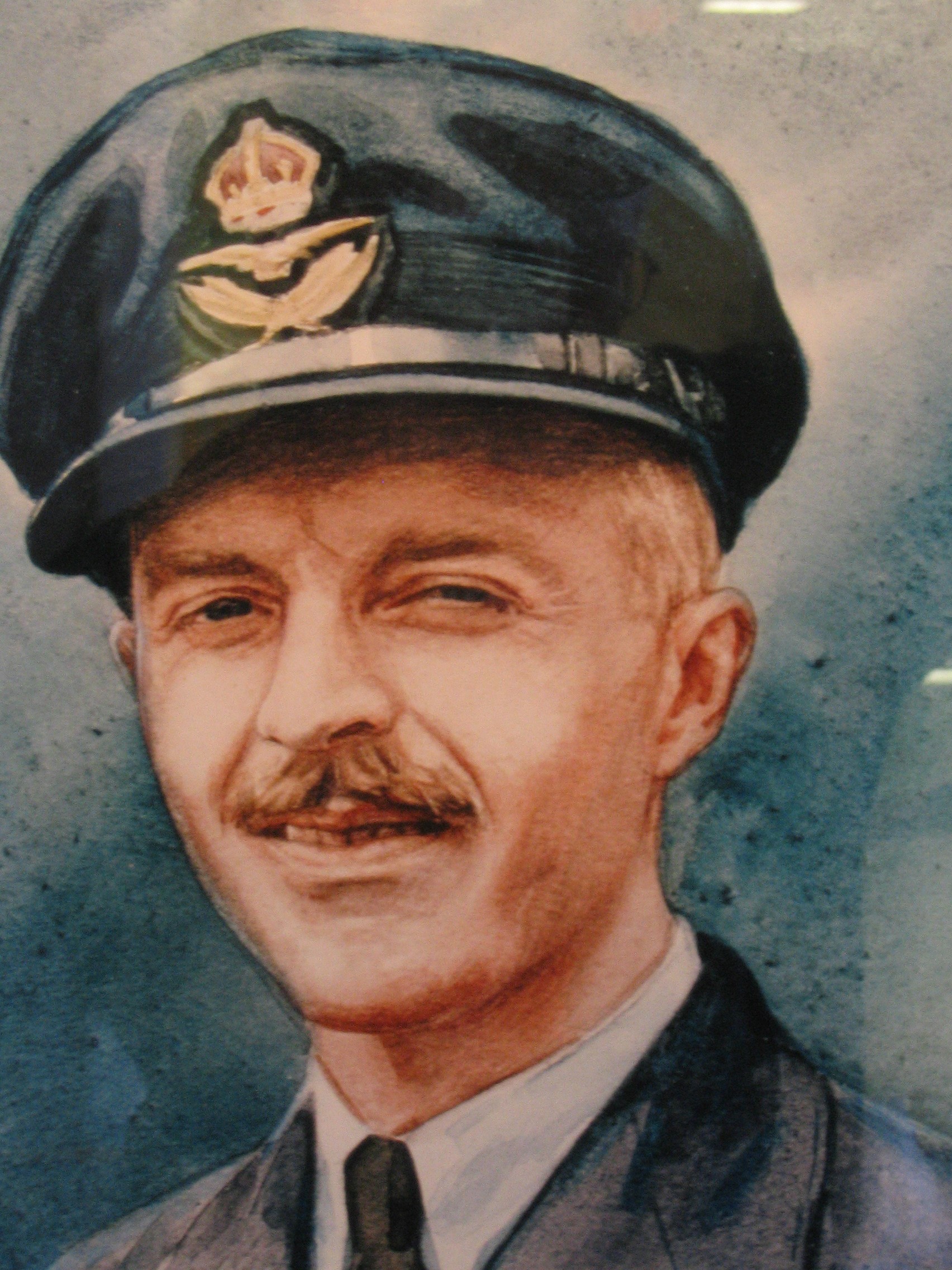 This colour portrait of David Hornell is based on a 1947 watercolour by Flight Lieutenant Paul Goranson.
(courtesy Shearwater Aviation Museum)

David Hornell was the son of Emily Crook and Harry Hornell. David’s mother died when he was very young, and he was raised by his aunt Elizabeth Hornell until his father remarried. He attended school in Mimico and was an all-round athlete who particularly enjoyed playing rugby, swimming and tennis.

Although Hornell won a scholarship to university, he took a job instead at the Goodyear Tire and Rubber Company in 1927. He was a clerk in the firm’s research department and taught Sunday school at the local United Church.

David Hornell joined the RCAF on 8 January 1941 and spent the rest of the year training to obtain his pilot and other qualifications. In December, he joined 120 (Bomber Reconnaissance) Squadron in Coal Harbour, British Columbia, as a pilot officer. On 26 January 1943, now Temporary Flying Officer Hornell married Genevieve Noecker.

In October 1943, Hornell joined 162 (Bomber Reconnaissance) Squadron at Dartmouth, Nova Scotia, as a temporary flight lieutenant. The unit flew the Canso PBY-5A, a twin-engine, long-range, amphibious aircraft that had four machine guns and more than 1,800 kg of depth charges. (It was the Canadian version of the American Catalina flying boat.)

In January 1944, the squadron deployed to Reykjavík, Iceland. The unit was attached to the RAF’s Coastal Command to help cover the midocean part of North Atlantic convoy routes. In June, Hornell and his crew were detached to Wick in northeast Scotland to help deal with heavy German U-boat activity in the area.

At 7:00 p.m. on 24 June 1944, Hornell and his seven-man crew were nearing the end of a lengthy, uneventful patrol, 200 km north of Scotland’s Shetland Islands, when one of the crewmen spotted a surfaced U-boat. Hornell at once turned to attack.

U-1225 was travelling at high speed when it saw the Canso and immediately opened up with heavy antiaircraft fire, punching two large holes in the plan’s starboard wing. Hornell’s two bow guns responded, but the starboard gun jammed.

Ignoring the enemy’s fire, he carefully manoeuvred for the attack. By now, his starboard engine and wing were on fire. The Canso was hit repeatedly by the U-boat’s guns, which made it vibrate violently. Although the plane was difficult to control, Hornell brought it down to 15 metres and released his depth charges over the submarine. The U-boat sank shortly after.

Hornell managed to gain a little height, but the fire in the starboard wing intensified and the vibration increased. Then the burning engine fell off. Hornell coolly turned his aircraft into the wind and brought it down safely on the heavy swell. Badly damaged and blazing furiously, the aircraft sank rapidly.

Only one of the plane’s four-man dinghies was usable. Since the dinghy could hold only seven of the eight crewmen, they took turns in the frigid water, hanging on to its sides. At one point it capsized in the rough seas and was righted with great difficulty. Two of the crew died of exposure. Throughout the ordeal, Hornell encouraged his crewmates.

Eventually, a Sunderland rescue flying boat arrived but could not land due to high seas. It dropped a lifeboat some 450 m downwind. Hornell offered to swim to it, although he was nearly exhausted. His crewmates had difficulty stopping him. A high-speed rescue launch finally reached the survivors after they had been in the water for 21 hours. By then, Hornell was blind and completely exhausted. He died shortly after being picked up.

The launch took the surviving crew members and Hornell’s body to the Shetland Islands, where he was buried in Lerwick New Cemetery. On 28 July 1944, the award of his Victoria Cross was announced in the London Gazette:

By pressing home a skilful and successful attack against fierce opposition, with his aircraft in a precarious condition, and by fortifying and encouraging his comrades in the subsequent ordeal, he displayed valour and devotion to duty of the highest order.


On 12 December 1944, Hornell’s widow received the medal from Governor General the Earl of Athlone in a ceremony at Rideau Hall. Today it is on loan to 1 Air Canadian Division Headquarters in Winnipeg, Manitoba.

There are several tributes to David Hornell. In 1960, the 700 David Hornell VC Squadron, Royal Canadian Air Cadets, was established in Weston, Ontario. The David Hornell Junior School opened in Mimico in 1961. Hornell was an inaugural inductee into both Canada’s Aviation Hall of Fame in 1974 and the Etobicoke Hall of Fame the same year. In 1979, Canada Post issued a postage stamp depicting his Canso as it banked to attack U-1225. The operations building at CFB Greenwood, Nova Scotia, was named in his honour in 1980. The Canadian Warplane Heritage Museum in Hamilton, Ontario, restored a Canso in his airplane’s colours and markings in 2001. A Toronto Island Airport ferry was renamed in his honour in 2010. (The ferry carries passengers to and from the Billy Bishop Toronto City Airport, which is named after First World War flying ace William Avery “Billy” Bishop, VC.) Royal Canadian Legion Branch 643 Flight Lieutenant David Ernest Hornell VC, Toronto, was established in 2017.