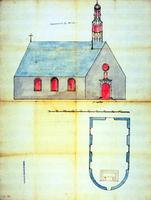 Jean-Baptiste Maillou, dit Desmoulins, builder, architect (b at Québec City 21 Sept 1668; buried there 18 Sept 1753). The brothers Joseph and Jean Maillou were stonemasons who learned architecture as Claude BAILLIF's employees. After his death in 1699 they acquired Baillif's architectural manuals and became his successors in Québec. Because of their knowledge of classical and French Renaissance design, the Maillou brothers were employed by merchants, clerics and government officials. Joseph's death in 1702 left Jean-Baptiste in charge of a flourishing business constructing houses, churches, religious houses, public buildings and fortifications. Government expenditures sustained New France and Maillou profited as a contractor for defences built at Québec and Crown Point (NY). He received the honorific title "Architect to the King" in 1719. The patronage of royal officials was vital to social advancement and, under the intendant's protection, this former stonemason became a propertied and influential Québec burgher. Having been a land surveyor and expert estimator, he was appointed deputy overseer of highways in 1728 to regulate construction along Québec's streets. He trained six apprentices and one, Girard-Guillaume Deguise, became a builder-contractor. None of Maillou's children followed in his trade. His house, begun in 1736 and much enlarged, still stands on Québec's St-Louis Street.