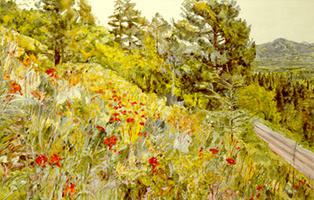 Dorothy Elsie Knowles, artist (b at Unity, Sask 7 Apr 1927). Knowles studied at U Sask, with Eli BORNSTEIN, and was stimulated by the EMMA LAKE ARTISTS' WORKSHOPS (Sask), where in 1962 Clement GREENBERG encouraged her interest in landscape. Her work is distinguished by a delicate, broken touch influenced by Cézanne and by thin paint surfaces that owe to a suggestion from Kenneth Noland. Knowles's long-standing interest in watercolours aligns her with the traditions of English landscape painting so important in Saskatchewan since the arrival in 1907 of Augustus KENDERDINE.

In 1987 Dorothy Knowles received the SASKATCHEWAN ORDER OF MERIT and in 2004 was awarded the ORDER OF CANADA.