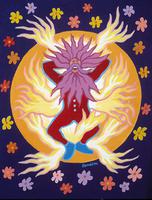 Edward Harrison, "Ted," artist, children's book author and illustrator (b at Wingate, County Durham, Eng 28 Aug 1926; died 16 January 2015 in Victoria, British Columbia). The best known of the Yukon painters, Harrison has won international recognition for his painting as well as for his children's stories and illustrations (The Last Horizon, 1980; The Cremation of Sam McGee, 1986). He studied art at the Hartlepool College of Art in England and later earned an art teacher's diploma. During his schoolteacher days in Carcross, YT, in late 1968, his work underwent a dramatic transformation. He simplified his forms almost to a childlike form and introduced sweeping rhythms and lush colours. His trademark paintings often depict faceless people, with the odd dog or raven, standing in front of sunken houses. The backdrop is always composed of colourful lakes, brilliant skies, and mountains that seem to blend into one another. Harrison was the first Canadian artist-illustrator to be shown at the International Children's Book Exhibition in Bologna, Italy, and at the Otani Memorial Museum of Art in Nishinomiya, Japan. He became a Member of the Order of Canada in 1987.