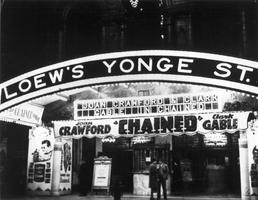 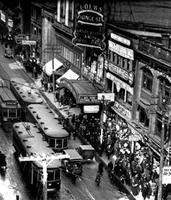 Located at 189 Yonge Street in the heart of downtown Toronto, the theatre complex known as the Elgin and Winter Garden Theatre Centre comprises 2 full-sized theatres stacked one above the other and joined by a grand staircase. Not only is it the only double-decker theatre ever constructed in Canada; it is also known for the enclosed rooftop garden theatre, which was popular in large American cities at the end of the 19th and beginning of the 20th centuries.

Marcus Loew, the American entrepreneur who formed the Loew's Theatres chain in the early 1900s (and later the MGM movie studio), commissioned the "movie palace" architect, Thomas W. Lamb, to design the Loew's Yonge Street and Winter Garden Theatres in Toronto. The Loew's (renamed the Elgin in 1978) opened on 15 December 1913, while the Winter Garden opened on 16 February 1914. The lower theatre was sophisticated with its ornate decor, and the Winter Garden was designed as a rooftop theatre where patrons were surrounded with decorative elements that suggested an outdoor setting. The enchanted garden atmosphere of the upper theatre commanded higher ticket prices than the Loew's. During its heyday, the theatres hosted such vaudeville luminaries as Milton Berle, George Burns and Gracie Allen.

The theatres' main facade on Yonge Street exhibits the architectural characteristics of other early 20th-century theatres designed in the Beaux Arts tradition, with engaged columns, balustrades and sculptural window surrounds. A prominent canopy and marquee sign appear along with a freestanding box office. The Victoria Street side is decorated with terracotta and patterned brickwork. The steel-frame construction necessary to bear the load of the double-decker theatres also allowed for no vision-obstructing support columns in either theatre.

The Winter Garden Theatre was designed in the tradition of an enclosed rooftop theatre — the first of its kind in Canada — sitting at a height of seven stories above the Elgin. Inspired by the European rooftop theatre with its flowers, leaves, lanterns and garden murals, it also features a proscenium arch stage and a seating capacity of 992. With trailing vines hanging off columns disguised as tree trunks, with fairy lights, resplendent blooms, garden murals and layers of real beech branches woven into the ceiling, it is as if the theatre has sprouted from a magical forest.

Before construction of the stacked theatres, Loew intended to rent out the Yonge Street frontage as commercial space, but the dimensions contravened a 1912 Toronto bylaw. To bypass the bylaw, Thomas Lamb had to file drawings with the City Architect's Office that showed a "sham" entrance on Victoria Street. Today, the Victoria Street entrance is still used — as the stage door.

Through the 1920s, patronage to both theatres began to drop. The Loew's was converted for sound films (The Wizard of Oz and Gone with the Wind both had their Canadian premieres here), and on 16 June 1928 the Winter Garden Theatre closed its doors. The Loew's — now the Elgin — closed in 1981. The Ontario Heritage Foundation immediately lobbied to save the building from demolition and, with financial support through private and corporate donations and federal and provincial governments, began an extensive restoration and preservation process.

In 1987, the theatres underwent a two-and-a-half-year, $29-million renovation directed by architect Mandel Sprachman; this was the largest theatre restoration ever undertaken in Canada. After being sealed away for more than half a century, the Winter Garden's original plasterwork was either restored or reproduced, as were the gilding, marble finishes, and decorative painting. Conservation specialists designed techniques to clean the murals covered with water-soluble paint; bread dough was used to clean them without damaging the paint. To recreate the original arboreal ceiling, 5000 real beech branches were harvested and woven into wire grids suspended from the ceiling.

To include modern conveniences and services, new cascading balconies, lobbies, backstage and rehearsal space and administration offices were added. Designated a National Historic Site in 1982, the Elgin and Winter Garden Theatre Centre reopened on 15 December 1989.

Today, the Elgin and Winter Garden Centre is one of the few buildings designed by architect Thomas W. Lamb that still survives. It continues to be used as a live-performance venue, featuring musicals, dramas, operas, dance, concerts and lectures.