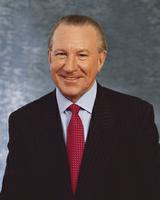 Eves became Conservative chief on 23 March 2002 and was installed as the province's 23rd premier on 15 April.

Ernest Larry Eves, "Ernie," politician, premier of Ontario (b at Windsor, Ont 17 June 1946). After a brief study of political science at the University of Toronto in the late 1960s, Eves attended Osgoode Hall Law School and was called to the Ontario bar in 1972. Returning to Parry Sound (where his father had settled when Eves was 17), he married, practised law and managed the trucking business that belonged to his wife's family. In 1981, winning by only six votes, he entered the provincial legislature as the Progressive Conservative member for Parry Sound. His riding bordered on Nipissing, the constituency of another freshly minted MPP, Mike

Over the next two decades, the political careers of Eves and Harris were inextricably linked. They served in the short-lived government of Frank Miller in 1985, and Eves was an important cog in Harris's successful campaign for the Conservative provincial party leadership in 1990. When Harris became premier in June 1995, he leaned heavily on Eves as deputy premier and minister of finance; over the first year of the mandate, extraordinarily, Eves was also in charge of the government's legislative business as house leader in the provincial parliament at Queen's Park. The expensively dressed, gravelly-voiced finance minister was at the epicentre of the Harris administration's Common Sense Revolution, balancing the provincial budget while slashing taxes, spending and services. John Ibbitson, the Ontario correspondent of the Globe and Mail, wrote in 1997 that "There may never have been a Canadian head of government more intimately allied to a finance minister than Mike Harris is to Ernie Eves."

Eves resigned from the Ontario government and parliament in February 2001 to become vice-chair of the investment bank Crédit Suisse First Boston and senior partner in a major Toronto law firm. Apparently reluctantly, he returned to politics to run for the party leadership after Harris announced his retirement later that year. Instead of appealing to his impeccable Harrisite roots, Eves moved moderately and vaguely in asking for the support of the more than 100 000 party electors and distancing himself from the Common Sense Revolution. "I am a fiscally responsible individual with a strong social conscience," he liked to proclaim, adding that he was a "pragmatist" and not an "ideologue." He became Conservative chief on 23 March 2002 with 54.6% of those who voted on the second ballot, and was installed as the province's 23rd premier on 15 April. His first moves, including a 17 June 2002 budget that raised health care and education expenditures and postponed promised personal and corporate tax cuts, were attempts to target the vote-rich centre of the Ontario political spectrum and were widely interpreted in the media as a repudiation of the Mike Harris legacy.

But in the 2003 provincial election, Eves's Conservative party was defeated and he was subsequently succeeded by Dalton MCGUINTY and the Liberal party. He continues to hold his seat for Dufferin-Peel-Wellington-Grey.