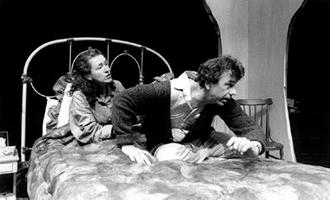 Nova Scotia's longest-running professional repertory theatre festival, housed in the Bauer Theatre on the ST FRANCIS XAVIER campus, began in 1988 on a shoestring budget of $25 000 when Ernie Curry and Jim Lerikos, local businessmen in the hospitality field, joined forces with Theatre Antigonish artistic director Addy Doucette. During its first season, 5000 patrons witnessed productions of Idle Gossip, Up and Under, and It's the Berries (a parody on Antigonish). Today 16 000 visitors annually enjoy main stage productions, theatre for children, a celebrity concert series, an experimental late-night theatre, and summer theatre camps.

Festival Antigonish presents primarily comedy and mystery. Canadian comedies such as Ceili House (1995) by Colleen Curran and The Affections of May (1993) by Norm Foster, and Agatha Christie mysteries - The Mousetrap (1989), Ten Little Indians (1990), Black Coffee (1991), The Hollow (1992), The Unexpected Guest (1993), Witness for the Prosecution (1995), Towards Zero (1996), and Go Back for Murder (1997) - have all been well received. More adventurous selections produced on the main stage, such as Bernard Pomerance's The Elephant Man (1994), directed by Richard Donat, and Tennessee Williams's The Glass Menagerie (1996), directed by David Renton, have proved less successful financially. The late-night theatre series, presenting new works written primarily by young Maritime playwrights, however, has cultivated a growing and appreciative audience for live theatre.

In 1996, faced with increased competition from the ATLANTIC THEATRE FESTIVAL, Festival Antigonish undertook a $450 000 renovation of its theatre space, which had been originally built as a gymnasium in 1916. Completely renovated and refurbished, only the external shell of the original building remains. The improved facilities, which opened to Bernard Slade's Same Time Next Year on 30 June 1996, include a high-volume air-conditioning system, wheelchair accessibility, an expanded backstage, and a semi-circular thrust stage with a seating capacity of 228.

After completing her 12th season as artistic director in 1999, which saw productions of Agatha Christie's Murder on the Nile and New Brunswick playwright Norm Foster's comedy The Foursome, Addy Doucette left for a year's sabbatical and returned to the company in 2000.