Newfoundland and Labrador is divided by three of Canada’s seven physiographic regions. These three regions are the Canadian Shield in Labrador, and the Appalachian and Eastern St. Lawrence Lowlands on the island of Newfoundland.

Labrador’s northern coastal region is mountainous, deeply fjorded, and grows only ground-level, subarctic vegetation. Its southern coast has a rugged, barren foreshore and a forested hinterland. The interior of Labrador is a well-forested, dissected plateau. Most of Labrador’s most-populous towns, including Happy-Valley Goose Bay and Labrador City, are located in its interior.

On the island of Newfoundland the west coast is dominated by the table-topped Long Range Mountains. The northeast coast, with its numerous bays, islands and headlands, fronts on the Atlantic Ocean from the Great Northern Peninsula to the Avalon Peninsula. Newfoundland’s southern coast has the deeply embayed characteristics of a submerged shoreline. The inland areas of the island are generally hilly and rugged. Shallow bogs and heath vegetation covers much of the land. Most of Newfoundland’s towns and cities are located in the bays and coves of the island’s west and northeast coasts.

Newfoundland and Labrador is divided by three of Canada’s seven physiographic regions. These three regions are the Canadian Shield in Labrador, and the Appalachian and Eastern St. Lawrence Lowlands on the island of Newfoundland. Labrador’s northern coastal region is mountainous, deeply fjorded, and grows only ground-level, subarctic vegetation. Its southern coast has a rugged, barren foreshore and a forested hinterland. The interior of Labrador is a well-forested, dissected plateau. Most of Labrador’s most-populous towns, including Happy-Valley Goose Bay and Labrador City, are located in its interior. On the island of Newfoundland the west coast is dominated by the table-topped Long Range Mountains. The northeast coast, with its numerous bays, islands and headlands, fronts on the Atlantic Ocean from the Great Northern Peninsula to the Avalon Peninsula. Newfoundland’s southern coast has the deeply embayed characteristics of a submerged shoreline. The inland areas of the island are generally hilly and rugged. Shallow bogs and heath vegetation covers much of the land. Most of Newfoundland’s towns and cities are located in the bays and coves of the island’s west and northeast coasts.

Labrador occupies the easternmost section of the Canadian Shield. The shield is mostly tough, ancient Precambrian igneous and metamorphic rocks. There are some areas of softer sedimentary rocks, notably in the west in a formation called the Labrador Trough. This area contains some of the most extensive iron ore deposits in North America. The interior region is plateau-like. On average this area is about 450 m above sea level. It is dissected by large, east-flowing rivers, such as the Churchill River and its tributaries. These rivers cut through the eastern rim of the saucer-shaped shield to discharge into the Labrador Sea. This rim is largely mountainous, especially in the north, where the Torngat Mountains rise to over 1,500 m. Of these, the highest is Mount Caubvick at 1,652 m. 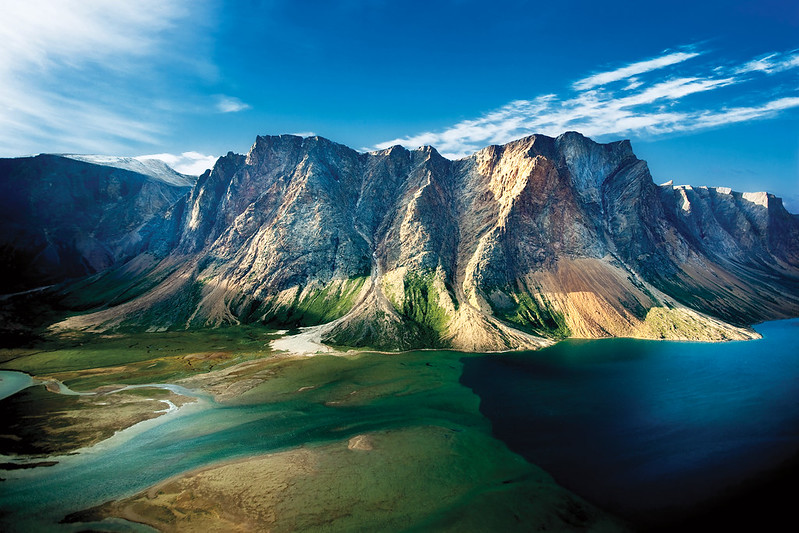 In 1993, a large nickel, copper and cobalt discovery was made at Voisey Bay (approximately 35 km southwest of Nain). It is considered the richest base metal discovery since the Second World War.

The island of Newfoundland is part of the Appalachian system and displays the typical southwest to northeast alignment in its major bays, peninsulas, river systems and mountain ranges. Rocks are more varied on the island than in Labrador. Continental drifting was followed by frequent periods of crustal deformation, interspersed by long periods of erosion and deposition. These events have combined to produce a variety of rocks of different ages.

The oldest rocks are Precambrian and found in the east, in and around the Avalon and Burin peninsulas. These rocks are mostly folded sedimentary rocks, but in a few areas later intrusions have solidified into volcanic rocks. Small remnants of gently sloping Cambrian and Ordovician sedimentary rocks are found in pockets along the coast. The most significant are in Conception Bay, where the Ordovician rocks that form Bell Island contain layers of hematite iron ore.

The central and western portions of the island are underlaid by a great variety of Palaeozoic rocks of sedimentary, igneous and metamorphic origin. Long periods of erosion following periods of uplift have left a poly-cyclical landscape. Remnants of old erosion surfaces are displayed in the plateau-like interior and on the flat-topped mountains of the Long Range. A mineralized belt in these Palaeozoic rocks, stretching from an area on the south coast just east of Channel-Port Aux Basques to the general area of western Notre Dame Bay on the northeast coast, contain ores composed of copper, lead, zinc, gold and silver.

The youngest and least-disturbed rocks of this Palaeozoic series lie in and around the coastal plain on the west coast. These are Mississippian and Pennsylvanian, containing much gypsum, which is quarried, and limestone. There are a few coal deposits and signs of petroleum, but nothing of commercial value has been discovered. Off Newfoundland’s coast, extensive deposits of Cretaceous rock stretch the length of the Grand Banks.

All areas of the province show the effects of continental glaciation during the Pleistocene era, the final stages of which occurred 7,000 years ago. Moving ice sheets scoured and sculpted the province’s surface. Most of the unconsolidated parent material beneath present-day soils consists of glacial debris or marine sediments.

The interior regions of both Labrador and the island are strewn with lakes and covered with moraines. These features are evidence of an immense ice cap. It initially moved radially outward from a centre west of Labrador, but in the later periods of the Pleistocene period broke down into smaller, separate ice caps with centres in Labrador, the west-central island and the Avalon Peninsula.

Most coastal regions are fjorded where the ice channelled down the valleys of the pre-glacial fluvial system. The longest and most steep-sided fjords occur in northern Labrador and around the Great Northern Peninsula of the island. However, there are several places where this scouring effect from ice movement is absent. Most bays have been deepened and are often fjord-like in character. Many places in the north of the island and in Labrador show, because of postglacial uplift, raised shorelines and large stretches of marine sediments.

The most striking and extensive marine deposits are those in the remnants of raised deltas that occur around St. George’s Bay and around Happy Valley-Goose Bay in Labrador. Coastal features, such as offshore islands, spits, tombolos and bay-mouth bars are common throughout the south and southeast coastal regions. 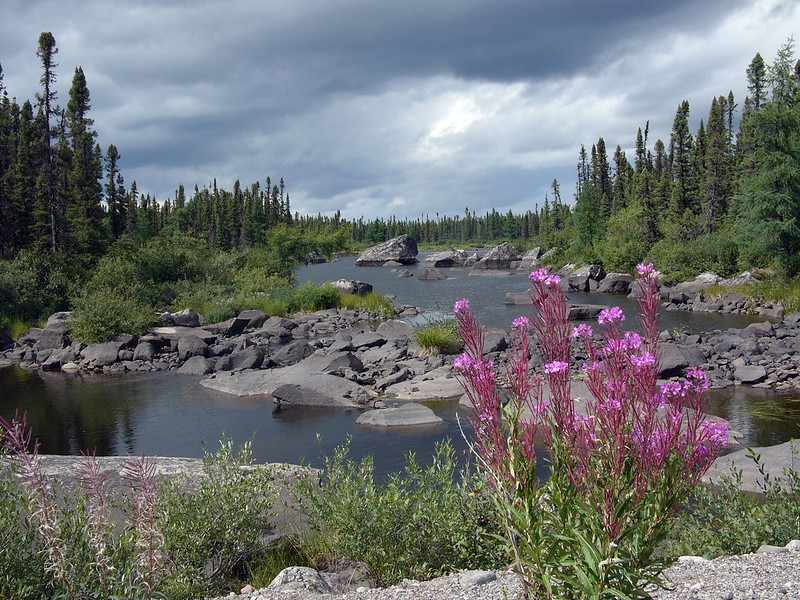 In northern Labrador, and in high places throughout the province, soils are generally coarse and immature. Due to cool temperatures and exposure to hard environmental conditions, vegetation is either entirely lacking or is only of the subarctic, lichen, tundra or ground-level variety.

Due to deep surface deposits, there are excellent forest stands in the interior regions, such as on the watersheds of the Churchill, Exploits, Humber and Gander rivers. Extensive bogland has developed in the many hollows of this glaciated landscape. The forest is made up of several of the species common to the boreal forest that stretches across northern North America.

Balsam fir predominates as the most common tree in Newfoundland and the second most common in Labrador. Black spruce makes up approximately one third of Newfoundland’s forests and two thirds of Labrador’s forests. Less dominant species include larch, pine, and deciduous species such as paper birch, aspen, alder, pin cherry and mountain ash.

Many of the non-forested areas support ground-level, mossy plants, some of which are food for wildlife. Others, such as the blueberry, partridge berry and bakeapple (“cloudberry”), are gathered for human consumption.

Through scouring and deposits, glaciation left a pockmarked landscape capable of storing vast quantities of water in thousands of lakes, ponds and bogs. Many of the lakes are in large, old valleys deepened by glacial scouring and dammed by glacial deposits. In interior Labrador hundreds of lakes have been combined by canals, dikes and dams, to create the Smallwood Reservoir behind the huge hydro development of Churchill Falls. The reservoir is roughly one-third the size of Lake Ontario.

Because of the moist climate and plentiful snowfall, the water table is high in all areas. Lakes are usually full and rivers flow perennially. There is naturally some seasonal fluctuation and occasionally very wet or dry years, but water shortages for domestic or industrial use are rare.

Precipitation varies by region even within northern Labrador. For example, Nain’s average annual precipitation is 892.7 mm, approximately half of which is from snow. However, Cape Chidley’s annual precipitation is approximately 460 mm. In coastal areas the modifying influence of the ocean reduces the temperature range between summer and winter. In southern Labrador coastal regions are cold in winter and cool in summer, and interior regions are often severely cold in winter but warm in summer. 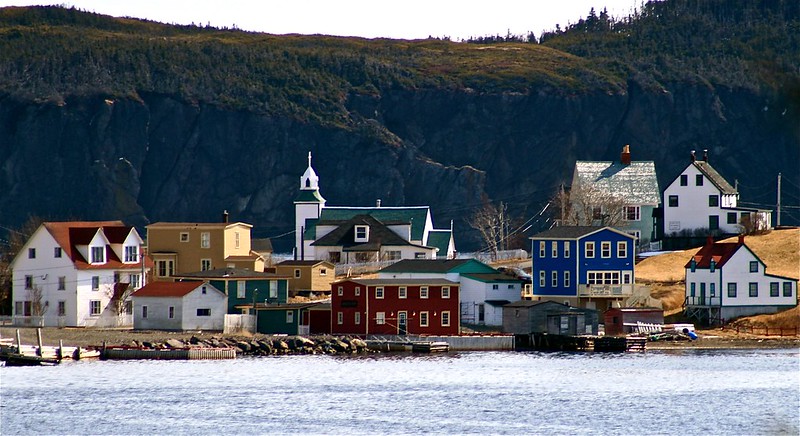 The town of Trinity is located on the east coast of Newfoundland.

Precipitation across the island varies in a northwest to southeast direction. Precipitation is fairly even every month, but in northern locations about half falls as snow and in the milder southeast, snowfall is only about 12 per cent. Average annual precipitation around the Avalon and Burin peninsulas is over 150 cm.

The mixing of the air masses off the Labrador Current and the Gulf Stream frequently creates fog on the Grand Banks, and in eastern and southern coastal areas, particularly in spring and early summer.

Since most of the interior of the province is relatively uninhabited, there is ample space and suitable habitat for wildlife. Some species constitute an important resource. There is a greater variety in Labrador than on the island. Among large game are several species of caribou, moose, black bear and, in northern coastal areas, polar bear. There are many small, fur-bearing animals, the most important of which are beaver, fox, lynx, rabbit, otter and muskrat. 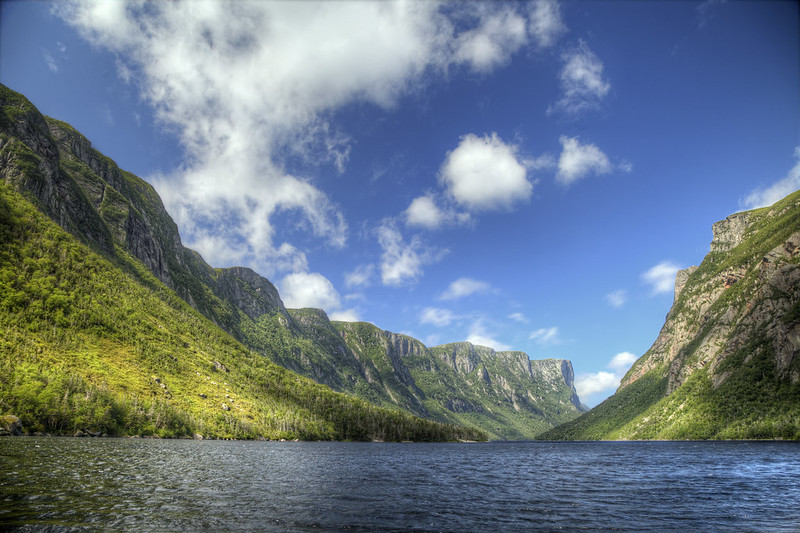 In many coastal areas colonies of millions of seabirds nest annually, primarily gulls, gannets, murres, kittiwakes and puffins. Conservationists have established sanctuaries to protect these birds in six provincial ecological reserves (e.g., the Gannet Islands off the Labrador coast, on Funk Island on the east coast of the Avalon Peninsula and at Cape St Mary’s on the south coast). Three migratory bird sanctuaries are on the Grey Islands and in Terra Nova National Park.

In addition to Terra Nova National Park, Newfoundland and Labrador is home to three other national parks, including Gros Morne National Park. There are also 32 provincial parks.