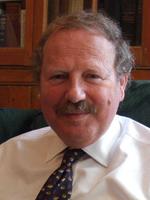 Ebers, George Cornell Peter
George Cornell Ebers, neurologist, researcher (born Budapest, Hungary, 24 Jul 1946). George Ebers came to Canada with his family as a toddler. He attended the University of Toronto and graduated as a doctor in 1970. He interned at the Royal Victoria Hospital in Montreal (1970-71), practiced briefly in family medicine in Strathroy, Ont (1971-72), and then completed a residency in Neurology at Cornell Medical Center in New York, ending his term there in 1975 as Chief Resident and Instructor (Neurology). Before moving to Oxford in 1999, Dr. Ebers practiced in London, Ont, at the London Health Sciences Centre, where he was a professor in the Department of Clinical Neurological Sciences, with cross-appointments in the Departments of Medicine, Microbiology and Immunology, and Biochemistry at the University of Western Ontario.

Ebers has published extensively in the medical literature with more than 300 publications in peer-reviewed journals, three books, 25 book chapters, and multiple editorials to his name. He is listed in A & C Black's Who's Who (2012). Professor Ebers' career as a clinician-researcher was celebrated in June 2012 at a Festschrift at Corpus Christi College, University of Oxford, where researchers and clinicians from around the world met to pay tribute to his life's work.

Ebers is a renowned researcher in the area of MULTIPLE SCLEROSIS (MS). Some of his early work at the clinic in London, Ont, led to the publication of several seminal papers on the natural history of MS. These initial steps in increasing understanding of the natural history of the disease set the stage for planning and interpreting the results of future therapeutic trials in MS.

As one of the principal investigators on the Canadian Collaborative Project on Genetic Susceptibility to Multiple Sclerosis (CCPGSMS), a study that began in 1993 in collaboration with neurologists at 19 MS clinics across Canada, Ebers and his colleagues have collected the largest database in the world of MS-related epidemiological and environmental data. Using these data, Ebers and his collaborators have performed multiple studies, developing a body of work that shows that susceptibility to MS is partly environmental and partly genetic.

In a 2008 paper in which he synthesized the research relating to environmental factors and MS, Ebers concluded that the most influential risk factor must be an early exposure that operates at a population-level. He suggested that sunshine and Vitamin D may be factors that interact with genetic susceptibility factors in individuals with MS. Ebers philosophy with respect to his career in science and medicine is perhaps best reflected in his large collection of noteworthy quotations. He attributes the following to Thomas A. Edison: "Opportunity is missed by most people, because it is dressed in overalls and looks like work."

Among the many awards given to Ebers are the Wainright Scholarship; JB Colling Prize in Medicine; Recipient Research Career Development Award; MS Society of Canada Ministry of Health Career Scientist Award; Pringle Medal; and the UWO Faculty of Medicine Award of Excellence.