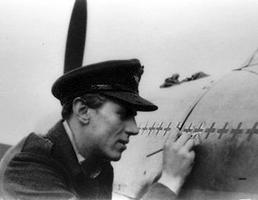 George Frederick Beurling, "Buzz," fighter pilot (b at Verdun, Qué 6 Dec 1921; d at Rome, Italy 20 May 1948). He destroyed 28 enemy aircraft in 4 months while serving as a sergeant-pilot with 249 Sqdn, RAF, on Malta in 1942 and was commissioned and promoted flying officer. Wounded in 1942, he transferred to the RCAF as a flight lieutenant. Flying with 403 and 412 Sqdns, he was credited with 3 more victories for a total of .

He rebelled against service discipline and was released in Oct 1944. Lost in a world without air combat - "It's the only thing I can do well; it's the only thing I ever did I really liked" - he joined the Israeli Air Force in 1948, and died when the aircraft he was ferrying to Palestine crashed.