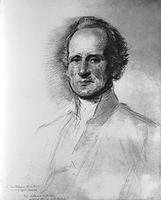 As a member of the Family Compact, Robinson was a defender of the imperial connection and a social hierarchy headed by a chosen elite. Drawing by George Berthon (courtesy Metro Toronto Library).
PreviousNext

George Théodore Berthon, portrait painter (b at Vienna, Austria 3 May 1806; d at Toronto 18 Jan 1892). Son of René Théodore Berthon, court painter to Napoleon, George Berthon was a classical European portraitist, trained by his father and influenced by Jacques-Louis David. He worked in England 1827-40, where he taught one of Sir Robert Peel's daughters. Settling in Toronto c 1841, he had a successful career doing formal portraits of Upper Canada's business and judicial establishment, now hanging in Osgoode Hall and Trinity College, Toronto, and the Senate Chamber, Ottawa. His masterpiece is considered the portrait of Chief Justice Sir John Beverley ROBINSON.
×