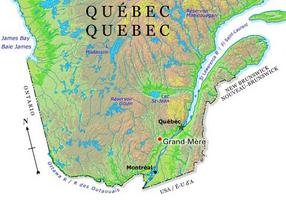 The first French missionary contact with the indigenous people, the MONTAGNAIS, took place in 1651, but the region remained virtually unsettled for nearly 200 years. In the 1830s some lumbermen began to work the area, and for the next half-century some small-scale trapping and logging on the St-Maurice constituted the only economic activity.

Grand-Mère owes its existence to the building in 1890 of a hydroelectric power station on the site of Grand-Mère Falls by Montréal businessman John Forman. This attracted many industries which are still active in the city. Grand-Mère has grown significantly since 1945, and it experienced an economic boom when a dam was built there in the mid-1970s, temporarily swelling the population to nearly 20 000.

Grand-Mère is an important railway and river transportation centre serving the lumber, pulp and paper, hydroelectric and textile industries operating in and around the municipality. It is also a major supplier of service industries.