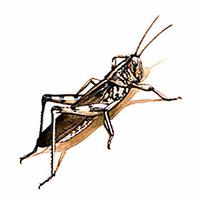 Grasshopper is the common name for straight-winged insects which, together with locusts, make up the order Orthoptera.

Over 12 000 species are known worldwide, about 140 in Canada, ranging in length from 2-12 cm. All provinces have grasshoppers; most species occur in the western grasslands, but some live in forest clearings and on trees in river valleys north to the Yukon. Grasshoppers are herbivorous and diurnal. Most have wings; many are strong fliers. Unlike locusts, grasshoppers are usually nonmigratory.

Usually one generation is produced annually from eggs that have overwintered. Some grassland species overwinter as immature nymphs; a few, in the interior of BC, require 2 years to mature. Females lay several clutches (egg pods), each containing 10-90 eggs, depending on the species. Under favourable late summer conditions, large numbers of egg pods are deposited by pest species in densely packed egg beds or distributed through cultivated fields. In spring many nymphs hatch and attack seedling cereal crops. Damage can be extensive: in outbreak years, 5-10% of cereal crops may be lost to grasshoppers.

Hot, dry weather favours population growth; cool, damp weather retards growth and encourages fungi and bacteria that can wipe out large grasshopper populations. Birds, small mammals and other insects prey on grasshoppers; small worms and maggots are internal parasites. Although weather and natural control agents are most effective in keeping numbers down, chemical control during an outbreak is still required for crop protection.

The so-called long-horned grasshoppers are not true grasshoppers. They are more closely related to crickets.