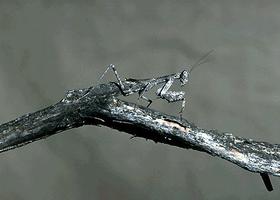 This Litaneutria minor was photographed near Osoyoos, BC (photo by Robert A. Cummings).

Mantid are carnivorous insects of the order Dictyoptera, related to cockroaches and more distantly to the grasshoppers and crickets (order Orthoptera). Like these relatives they have biting mouthparts and simple metamorphosis without a pupal stage. There are about 2000 species worldwide.

Mantids are recognized by their elongate thorax and powerful, grasping front legs, with which they capture their insect prey. Most species are fully winged, with the leathery, narrow front wings protecting the fanlike hind wings; many species, however, are flightless. Most mantids are cryptic in coloration or form and may resemble leaves, twigs or flowers. When alarmed they often display bright, warning colours or rear up in threatening postures.

Three species of mantids are recorded in Canada. The praying mantid (Mantis religiosa) was introduced accidentally from Europe to New York, US, in 1899 and subsequently spread to southern Ontario and Quebec. It was later introduced to the Okanagan Valley, BC, to control grasshoppers. The eggs are laid in a frothy substance that hardens into a case and glues the eggs to a twig, fence post or other support. The eggs overwinter and hatch in the spring; adults appear in the late summer.

The Chinese mantid (Tenodera aridifolia) was introduced to eastern North America from China in 1896 to control insect pests. The ground mantid, (Litaneutria minor) ranges from Mexico north to BC, and is the only native Canadian mantid. In Canada it is known only from the dry grasslands of the southern Okanagan Valley. The males are winged; females are flightless but are agile runners.