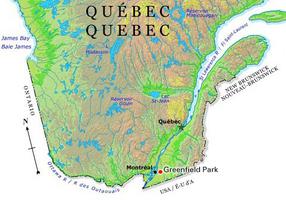 Greenfield Park, Qué, pop 16 978 (2001c), 17 337 (1996c), incorporated as a city in 1911, from January 2002, is a borough of the new city of LONGUEUIL created by the amalgamation of 8 distinct municipalities. Greenfield Park is located opposite Île de Montréal on the South Shore of the St Lawrence River.

The site of Greenfield Park was part of the Seigneury of Longueuil. The area remained primarily agricultural until the mid-19th century, when railway development began to encourage the growth of the towns and villages around the city of MONTRÉAL. In 1854 the GRAND TRUNK RAILWAY began construction of the Victoria Bridge linking Montréal with the South Shore. The bridge was completed in 1859 and SAINT-LAMBERT and other communities began to grow, in effect as suburbs of Montréal. The rapid growth of Saint-Lambert eventually spilled over into neighbouring agricultural areas, and in 1907 residential lots began to be sold in what would become Greenfield Park. By 1911 the population had grown enough to justify incorporation as a separate town. The name of the community was chosen to describe the fields and woods that dominated the area.

The construction of an electric railway from Montréal in 1913 encouraged additional growth. As late as 1939, the population of Greenfield Park was just over 1700 people. Much of its growth occurred between the late 1950s and early 1970s and was similar to the expansion of other residential communities on the periphery of the Montréal urban community. Unlike most of the other residential communities, Greenfield Park's growth halted by 1981 and then it experienced a shrinking population. Although originally settled mainly by British immigrants, francophones now constitute one half of the population.