Whether the subject is the nativity scene or Adam and Eve in the Garden of Eden, Nincheri's works are evocative portrayals of well-known biblical stories. Although he received his art education in Italy, his talents flourished in Canada, where he arrived in 1914.

This article was originally published in Maclean's Magazine on January 8, 1996

Whether the subject is the nativity scene or Adam and Eve in the Garden of Eden, Nincheri's works are evocative portrayals of well-known biblical stories. Although he received his art education in Italy, his talents flourished in Canada, where he arrived in 1914.This article was originally published in Maclean's Magazine on January 8, 1996 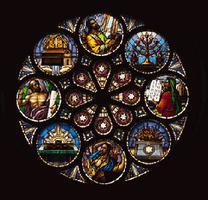 The Italian-born artist was the most prolific religious artist in North America (courtesy Maclean's).
PreviousNext

In the summer of 1993, art historian Ian Hodkinson wandered into Ottawa's Notre Dame Cathedral on Sussex Drive, looking to kill time before a meeting at the National Gallery of Canada. What he discovered amazed him - dramatic images blazing from stained-glass windows, each portraying a vivid scene from the Bible. Hodkinson, professor emeritus of art conservation at Queen's University in Kingston, Ont., noted the name of the artist, Guido Nincheri. He has since found that the Italian-born Nincheri was the most prolific religious artist in North America, producing stained glass and frescoes for more than 100 churches in Eastern Canada and New England. Between 1915 and his death in 1973 at age 87, Nincheri repeatedly affirmed his devotion to God and the style of the Renaissance, and his reputation spread from parish to parish. He was cited by Pope Pius XI in 1933 as the church's greatest artist of religious themes, and knighted by the Italian government in 1972. But art historians, considering his style passé, have ignored him until now. "It's a pity his work is not better known," says Hodkinson. "He brought tremendous imagination and detail to these depictions."

Whether the subject is the nativity scene or Adam and Eve in the Garden of Eden, Nincheri's works are evocative portrayals of well-known biblical stories. Although he received his art education in Italy, his talents flourished in Canada, where he arrived in 1914. But, like many of his generation, his life was altered forever by the two World Wars; his darkest moments paralleled those of other Italian-Canadians. Now, they and others are celebrating his prolific career and the continuing vitality of his art. During Montreal's 350th anniversary celebrations in 1992, Nincheri was honored as a builder of the city. And in November, an Italian-Canadian cultural group published Guido Nincheri maître verrier, a book documenting his stained-glass windows in Montreal.

A tiny man with a face of obvious intellect and sensitivity, Nincheri was a devout Roman Catholic. Born in the Tuscan town of Prato, Italy, in 1885, to a wealthy textile broker and his wife, Nincheri first impressed a teacher with his artistic ability when he was nine. But his father strongly objected to his son's desire for a career in art. Nincheri, not interested in taking over the family business, left home when he was 18 for nearby Florence, gaining entrance to that city's renowned Academy of Fine Arts. During 12 years there, he studied classical design and architecture while basking in the city's wealth of fine Renaissance works, including masterpieces by such artists as Botticelli and Michelangelo.

In 1914, while en route to Argentina for a commission at the outbreak of the First World War, Nincheri and his wife, Giulia, found themselves stranded in Boston because of fears of a naval attack. He followed the advice of a friend who suggested that he might feel more at home in French-speaking Montreal. Soon after his arrival, he was hired by Quebec's leading church decorator of the day, Henri Perdriau. It was then that Nincheri, previously a painter and designer, was drawn to the brilliance of stained glass. Loris Palma, president of the Society for the Diffusion of the Artistic and Cultural Heritage of Italian-Canadians, says Nincheri was a perceptive man. "He saw there was a big demand, learned the technique from Perdriau and soon was out doing it himself."

To create the windows, plates of colored glass are cut to shape and pieced together before the paint is applied. Then the puzzle is taken apart and the plates are heated in a kiln, which fuses oxides in the paint to the glass. The plates are then removed and the illustration is reconstructed, with lead "cames" or rods holding the pieces together. By creating translucent rather than transparent windows - the preference in North America - Nincheri allowed a more uniform dispersal of light, which he found was a more effective way of illuminating his frescoes - huge murals painted across church ceilings that are a rarity in North America. His education also made him well-suited to the design of church interiors, including bas-reliefs, statues and stations of the cross.

Much in demand in the 1920s, Nincheri began to shuttle back and forth between Montreal and small towns throughout Quebec. Juggling work in several places at once, he sometimes returned again and again over the course of 25 years to finish elaborate projects, such as the 125 windows in the Trois-Rivières cathedral, some of which are 25 feet high. Montrealer Matthew Martirano, 80, worked for Nincheri for more than 60 years, learning the stained-glass trade from him. He says the artist had no equal. "He was a dedicated, religious man with very, very high standards," recalls Martirano. "He loved his work, so he didn't view it as work."

Nincheri's frescoes are also now winning more attention. Hodkinson, who is preparing a study of mural painting in Canada, says that Nincheri painted more and bigger murals than any other Canadian artist. Painting frescoes properly, while the plaster is still damp, is problematic and a rare skill today. With his various forms of art, adds Hodkinson, Nincheri always managed to create strikingly original portrayals of the same biblical stories as he moved from church to church. He also created many works in Ontario and the Maritimes, and, during the 1930s and 1940s, his reputation crossed the border into the United States. The frescoes that he created in the mid-1940s in St. Ann's Roman Catholic Church in Woonsocket, R.I., drew critical acclaim and adulatory newspaper features.

His admirers have varying opinions on which church constitutes his masterpiece. Some say it is Montreal's St-Léon-de-Westmount parish, whose interior Nincheri worked on between 1928 and 1944. It offers stirring examples of his stained-glass style. One window, the evocative Christ's Entry into Jerusalem, has a flowing sense of movement created by the crowd of disciples walking along with and behind Jesus.

Others point to a spectacular fresco in Notre-Dame-de-la-Défense parish, also in Montreal. That work, painted in the 1930s, honored the 1929 Lateran Treaty, which granted the Vatican independence from Italy. But the fact that the fresco included Italian fascist leader Benito Mussolini on a horse enraged federal authorities. Nincheri was arrested and interned with hundreds of other Italians by the Canadian government during the Second World War. His family argued that church trustees forced him to include the dictator under threat of losing the contract. Nincheri was released only after his outraged wife produced design sketches that she said proved that her husband had not originally planned to include Mussolini. Nincheri's 75-year-old son George (another son, Gabriel, died in 1975), who lives in Montreal, says that his father rarely spoke of his wartime ordeal, but was badly hurt by it. "My father was against totalitarianism. He always said religion was the only thing that helps man walk on the straight." The image of Mussolini, covered during the war, can still be found in the church today.

After the war, Nincheri's production continued and he never betrayed his Florentine education. Rev. Marcel Brodeur remembers as a child looking up to see Nincheri on scaffolding in Ottawa's St. Anthony's Church, working for hours on stained-glass windows. Brodeur, now the parish priest, says the extraordinary art helps him do his job. "When you're surrounded by beauty," he notes, "it's a lot easier." Although Nincheri slowed down in his later years, he continued working in his studio on Pie IX Boulevard in Montreal virtually until his death (his wife died 13 years later, in 1986).

Hodkinson hopes that his study of murals will help to boost Nincheri's profile. That sentiment is echoed by Martirano, who declares, "I'm tired of people coming back from Europe and telling me how beautiful the churches are. We've forgotten what we've got here." Thanks to Guido Nincheri, worship is esthetically as well as spiritually uplifting for many Canadian churchgoers.