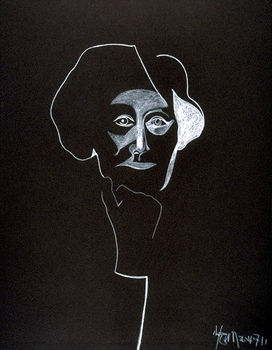 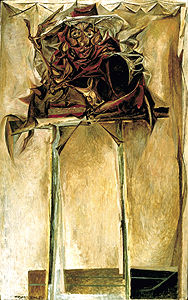 Harold Barling Town, OC, artist (born 13 June 1924 in Toronto, ON; died 27 December 1990 near Peterborough, ON). An Officer of the Order of Canada and one of his generation’s most celebrated artists, Harold Town was an outspoken member of Painters Eleven, largely responsible for the name of the group and the forewords to their catalogue exhibitions.

The son of a train conductor, Town was obsessed with drawing from early on. He studied at Western Technical-Commercial School and the Ontario College of Art (now the Ontario College of Art and Design University) for two years, from 1942 to 1944. He was especially drawn to art history and the Old Masters, and was influenced both by the art he saw in the Art Gallery of Toronto (now the Art Gallery of Ontario) and the antiquities he was exposed to at the Royal Ontario Museum. Town gained international recognition for his technically inventive "single autographic prints" which he made from 1953 to 1959. After his first solo exhibition in Toronto at the Picture Loan Society in 1954, prints were immediately purchased by the Art Gallery of Toronto and the National Gallery of Canada. They won awards in Ljubljana (Yugoslavia) and Santiago (Chile), were acquired by the Solomon R. Guggenheim Museum and the Museum of Modern Art (both in New York City), and led Alfred Barr, who was the director of the latter museum, to consider Town one of the world's greatest printmakers.

In the 1950s and early 1960s Town's work reflected his interest in Willem de Kooning, Picasso and the Asian art he saw in the Royal Ontario Museum. His highly inventive collages provided an antidote to such influences. Town represented Canada at the Venice Biennale (1956, 1964) and the São Paulo Bienal (1957, 1961), was shown in documenta III (1964) in Kassel, West Germany, and was acclaimed by such writers as Robert Fulford and Alan Jarvis as one of Canada's most important artists.

In 1958, Town received a commission to execute a large mural for Ontario Hydro’s Robert H. Saunders Generating Station on the St. Lawrence Seaway at Cornwall. Echoing Jackson Pollock’s legendary Mural (1943), created for Peggy Guggenheim’s New York residence, Town’s wholly abstract mural, with its huge wheeling forms, was meant to symbolize the confrontation between technology — a product of the human mind and human history — and the raw forces of nature, like rushing water.

By the mid-1960s and into the 1970s, Town was as much of a celebrity as a Canadian painter has ever been. Envied for his free-wheeling bohemian lifestyle, Town was profiled in magazines like Maclean’s, he was on the cover of the Canadian edition of Time magazine, and he hobnobbed with the cultural elite at Toronto’s notorious Sordsmen’s Club with figures like writer and broadcaster Pierre Berton, publisher Jack McClelland and architect John C. Parkin. Earning what were then record prices for a living artist, up to $4,000 for a large canvas, he opened a second studio at the mythic Studio Building at 25 Severn Street in Toronto, which Lawren Harris had helped build for the Group of Seven. Town also contributed book reviews to the Globe and Mail and had a regular column in Toronto Life. He was granted a honorary doctorate at York University in 1966 and in 1968 he became an Officer of the Order of Canada.

Thereafter, Town was influenced by fashionable tendencies like pop art, op art and assemblage, and became increasingly whimsical, as in the Musclemen series and the Toy Horses series. His later work was faulted by critics like Nathan Cohen and Paul Duval for mere facility and insufficient seriousness, but Town maintained that "all criticism of the visual art is suspect." In addition, through the 1960s and 1970s, the art world, including the Canadian art world, was moving away from the forms of abstract expressionism that formed the core of Town’s reputation and toward more conceptually grounded art, such as that of Michael Snow, Joyce Wieland, Jack Chambers and Greg Curnoe, and Town exhibited less and received less international attention. In 1976, Town purchased Old Orchard Farm outside Peterborough, Ontario, where he worked for the remaining years of his life.