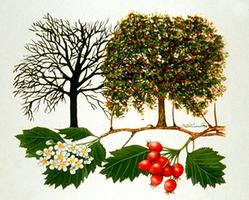 Hawthorn with flowers and berries (artwork by Claire Tremblay).

Hawthorn, small, deciduous tree or shrub of genus Crataegus, family Rosaceae (rose). Hawthorns are normally armed with strong thorns (modified branches), and have fragrant, insect-pollinated, white, pink or, occasionally, red flowers in showy clusters. The leaves are serrate or lobed and brilliantly coloured in autumn. The red, applelike fruit is fleshy and has 1-5 bony seeds. Most species occur in the north temperate zone.

Because of the differing treatment of the many hybrids and asexual clones found in nature, the number of species is variously estimated from 100 to 1100, although the lower numbers appear more realistic. In eastern Canada, hawthorns are very common and are represented by many species; in the West, they are less common. The berries were eaten and used medicinally by Canadian natives and early settlers, who also made hawthorn wine. Hawthorns are ornamentals, used in landscaping as trees or in hedges.