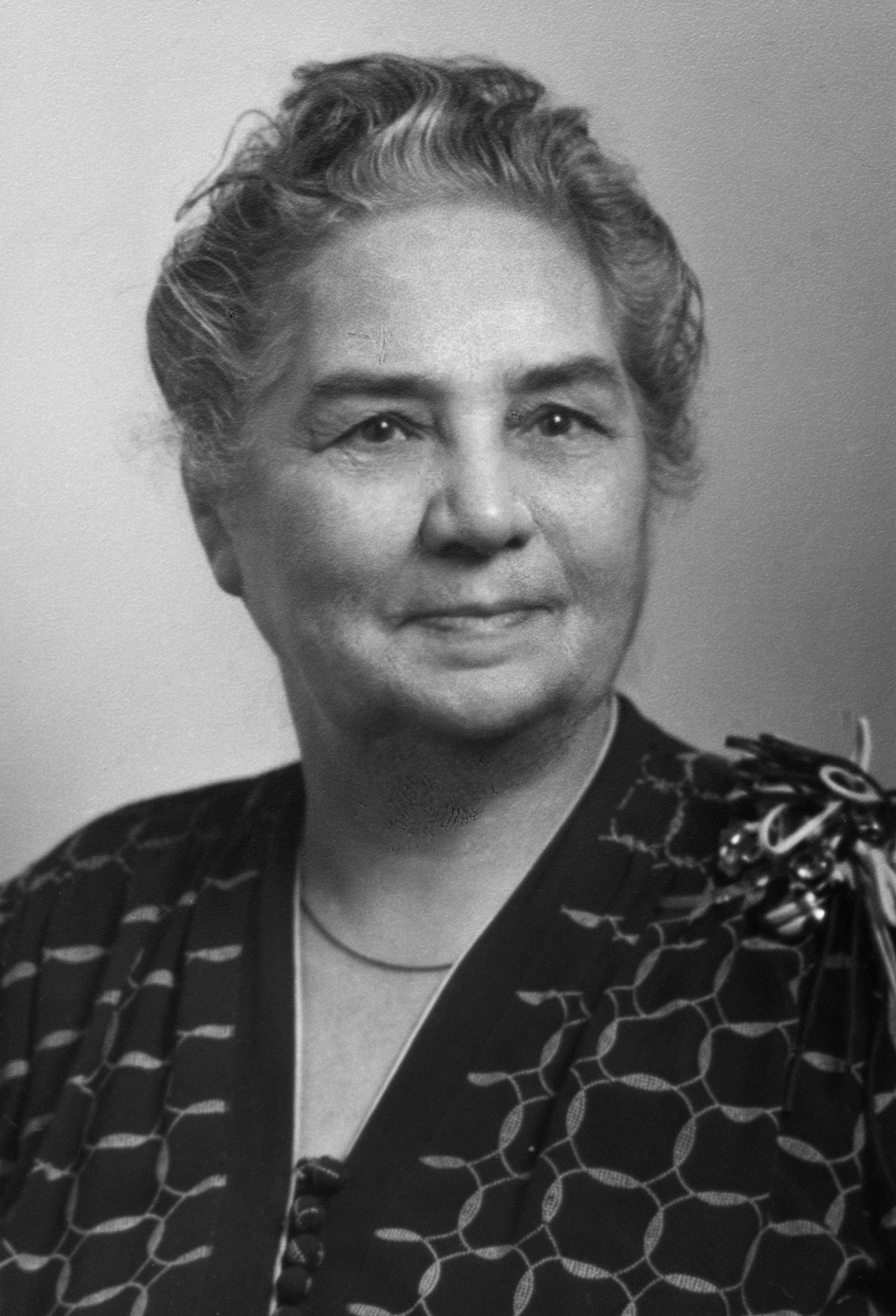 General strike: A protest in which workers in all or most industries walk off the job.

Labour: Generally, labour means work. But in this article, it stands for workers as a class or political power.

Labour union: A group of workers that forms to protect its members’ rights and to seek better pay, benefits and conditions. The term is often shortened to union. (See Labour Organization.)

Helen Armstrong was the eldest daughter of ten children born to Alfred F. Jury and Emma Hart. Alfred Jury was a tailor, labour leader and co-founder of a Canadian chapter of the Knights of Labour. Helen grew up working in her father’s Toronto shop, where she witnessed energetic discussions about labour issues. It was here that she met a young carpenter and labour activist named George Armstrong. On 8 September 1897, Helen and George were married in Montana, United States. They later lived in New York and moved back to Canada in 1904, settling in Winnipeg, Manitoba. Together they had four children: three daughters (Helen, Mary and Mabel) and a son (Frank).

Helen Armstrong became active in labour organizing and politics in Winnipeg during the First World War. She fought for the rights of women workers, in particular. In early 1917, Armstrong helped revive the Winnipeg Women’s Labor League (WLL) and became its president. She argued that women needed a living wage and led the organization of unions for women workers. In March 1917, she organized the Retail Clerks’ Union, and in May led the women clerks of Winnipeg’s Woolworth’s department store out on strike. In 1918, she organized the Hotel and Household Workers’ Union and the Housemaids’ Union. The next year, Armstrong organized the city’s biscuit-factory workers, laundry workers and knitting machine operators. (See also Women in the Labour Force; Early Women’s Movements in Canada: 1867–1960.)

Did you know?
Helen Armstrong was affectionately known as “Ma” among the working classes in Winnipeg. This nickname for mother was a fitting term of endearment for the leader of the women’s unions and protector of workers’ rights. While news coverage often portrayed her as aggressive, personal accounts tell a different story. In interviews with Armstrong documentarian Paula Kelly, her grandchildren remembered her as a warm and compassionate figure.


Armstrong actively opposed conscription (forced enlistment in the military) during the First World War. In place of conscription, she believed that the federal government could increase voluntary enlistment by providing greater financial support to military families. At one large anti-conscription meeting, she stood in the way of a group of soldiers threatening the event’s speakers. The only woman on the platform, Armstrong was reportedly “bruised severely from head to foot” by the soldiers. Even after the Military Service Act made conscription law in August 1917, Armstrong continued to support the anti-conscription campaign. She brought food and clothing to the young men who were serving two-year prison sentences for refusing military service. On 13 December 1917, she was arrested for distributing anti-conscription pamphlets on the street in Winnipeg. 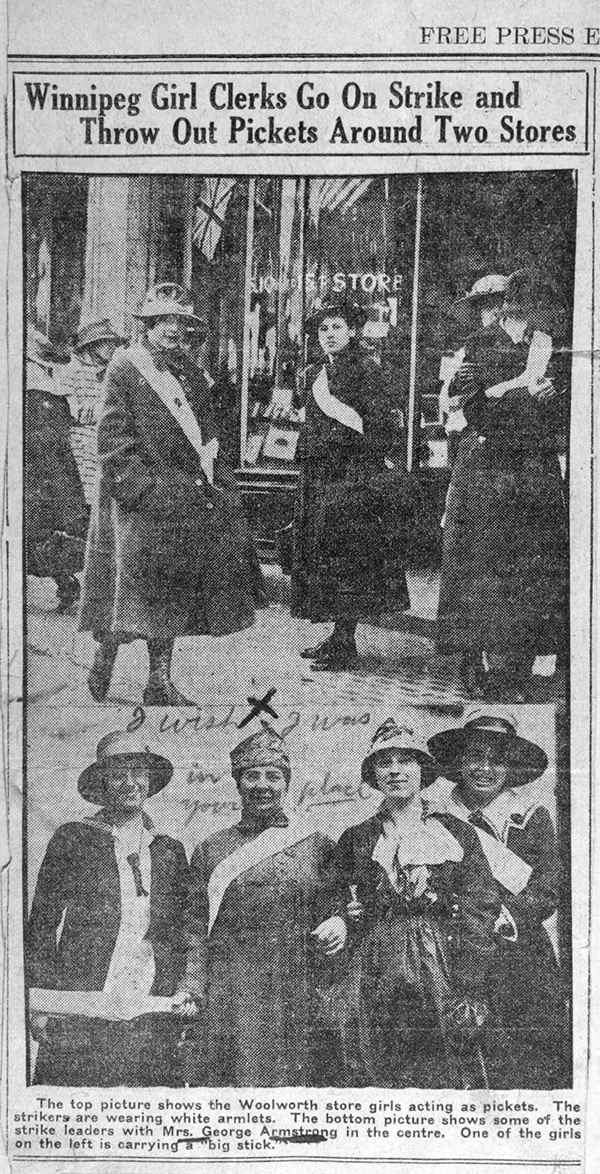 Helen Armstrong led and organized women workers in the 1919 Winnipeg General Strike. She was one of only two women among some 50 men on the strike committee. Armstrong was so central to the organization of women workers in Winnipeg by the time of the strike that the Toronto Star called her the “business manager of the Women’s Unions.”

She was not afraid to use aggressive tactics to harass strikebreakers. Armstrong also developed new strategies to recruit more women strikers. The Winnipeg Evening Tribune reported that rather than simply picketing outside businesses, Armstrong started an early-morning recruitment drive to convince women workers to join the strike as they arrived at work.

Protesters tip a streetcar at the corner of Main Street and Market Avenue during the Winnipeg General Strike on 21 June 1919.

Helen Armstrong was arrested twice during the strike: on 15 May (the day it began) for disorderly conduct on the street, and on 24 June (in its final days) for her actions to prevent strikebreakers from selling newspapers. She was jailed without bail for three days after the second arrest. When the strike ended on 26 June, both Helen and George Armstrong (along with other strike leaders) were in jail.

During the strike, Helen Armstrong established the Labour Café, which provided women strikers with three free meals a day. This was an essential service for those who lost wages due to the strike. The cafe also welcomed men but encouraged them to pay or make a donation. It reportedly served 1,200 to 1,500 meals a day.


After the strike, Armstrong ran twice for Winnipeg city council in the early 1920s. However, she was unsuccessful in both campaigns. During her 1923 run for council, Armstrong said: “I shall continue to work for more protection for our girls and women workers, also for the enforcement of all laws relative to wages, better conditions and our social welfare problems.”

After Helen lost the city council election in 1923, the Armstrong family moved to the Chicago area. This was also because George, blacklisted for his role in the strike, had struggled to find work in Winnipeg. However, by early 1929, they had returned to Winnipeg. Helen continued working on behalf of women, including advocating for single and widowed mothers. In the 1940s, the Armstrongs moved to Victoria, British Columbia, and then to California, where one of their daughters lived. Helen Armstrong died in 1947 at the age of 71.