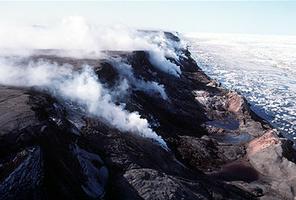 Smoking Hills on the Arctic coast, where lignite and jarosite beds are burning, giving off sulphurous smoke. They have been burning since at least 1800 (courtesy Parks Canada).
The Horton River, 618 km long, rises north of GREAT BEAR LAKE in the Northwest Territories and empties into Amundsen Gulf. Shallowly entrenched in the upper part of its course, it cuts a deep (up to 200 m) valley into the soft Cretaceous bedrock in its lower course. It originally reached the BEAUFORT SEA at Harrowby Bay, but one of its meanders cut a channel to Amundsen Gulf around 1800, shortening its course by some 100 km. Near the present delta are the Smoking Hills, where lignite and jarosite beds are burning, giving off sulphurous smoke. These beds were already burning in 1826 when John RICHARDSON mapped the shoreline. The river is shallow, but navigable by small craft. Its valley is wooded to within 100 km of its mouth, where the treeless, shrubby tundra begins. A trading post operated at the delta 1918-31, but there are no settlements along the river.
×