Theatre by Indigenous Peoples in Canada

The experience of Indigenous peoples became a subject for Canadian theatre in the late 1960s in works such as George Ryga's The Ecstasy of Rita Joe (1967), Herschel Hardin's Esker Mike and His Wife (1969) and Len Peterson's Almighty Voice (1970). With figures like Tomson Highway at the forefront, by the 1990s Indigenous theatre had become a crucial part of mainstream Canadian theatre. 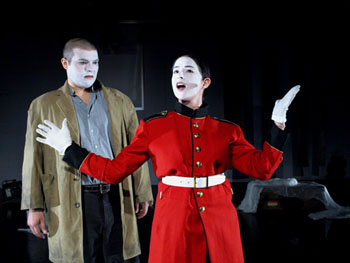 The Centre for Indigenous Theatre

It wasn't until the mid-1970s that Indigenous theatre was able to make serious headway in the development of its own writers, actors and theatres. The Association for Native Development in the Performing and Visual Arts (ANDPVA) established the Native Theatre School (now the Centre for Indigenous Theatre) in 1974. This intensive program exposed promising artists to some of the best professional teachers of voice, movement and text, and provided a forum for the exploration of Indigenous culture and performance traditions. Virtually all Indigenous theatre artists in Canada have passed through this theatre school.

In 1980, the first Indigenous Theatre Celebration was held in Toronto, bringing together Indigenous artists from all over the world. In 1982, Native Earth Performing Arts was established in Toronto. Under the artistic direction of Tomson Highway, the company quickly developed an impressive production history. From 1982-85, Native Earth experimented with collective creations and in 1986 the company achieved its first big popular success with The Rez Sisters. Written by Highway, directed by Larry Lewis and choreographed by René Highway, Tomson Highway’s dancer and choreographer brother, The Rez Sisters garnered both the Dora and Chalmers awards for best new play for its account of a group of passionate bingo players who travel down to Toronto in the hopes of making the big win. Humorous and moving, The Rez Sisters toured across the country and was invited to the Edinburgh Fringe Festival in 1988. In 2011, Ken Gass directed a production of The Rez Sisters at Factory Theatre in Toronto, featuring a culturally diverse cast.

In 1989, Tomson Highway, René Highway and Larry Lewis teamed up again on Dry Lips Oughta Move to Kapuskasing, a portrayal of life on a First Nations reserve from the men's perspective as their wives and girlfriends go off to play a hockey game. The play won a second Chalmers award for Highway and four Dora awards for best production, best new play, outstanding male performer (Graham Greene) and outstanding female performer in a supporting role (Doris Linklater). In 1991, Dry Lips Oughta Move to Kapuskasing was produced at The Royal Alexandra Theatre, marking the first work of Indigenous theatre to be mounted on that stage.

Of these writers, one of the most prolific is Daniel David Moses, whose works also include Coyote City (Native Earth, 1988), The Dreaming Beauty (Inner Stage, 1990), Big Buck City (Cahoots, 1991) and The Moon and Dead Indians (Cahoots, 1993). The Dreaming Beauty, an allegory of the renaissance of Aboriginal cultures combining myth and the tale of Sleeping Beauty, won first prize in the 1990 Canadian National Playwriting Competition.

In 2003 Native Earth Performing Arts appointed Yvette Nolan as the company's artistic director. In 2004-2005 the largest Native Earth production in years, The Unnatural and Accidental Women by Marie Clements, featuring a cast of 13, was selected by Toronto's NOW Magazine as one of the top 10 theatre productions of 2004. Dreary and Izzy (2005-2006) was Tara Beagan's humorous and moving portrait of two sisters navigating life with fetal alcohol syndrome. The season also launched Honouring Theatre, touring three Indigenous productions from Australia, New Zealand and Canada to Peterborough, Toronto, Regina and Vancouver. Other notable productions under Nolan’s artistic directorship include A Very Polite Genocide or The Girl Who Fell to Earth (2008) by Melanie J. Murray, Almighty Voice and His Wife (2009) by Daniel David Moses and Salt Baby (2009) by Falen Johnson. In 2011, Yvette Nolan left Native Earth Performing Arts as the artistic director. She was replaced by Tara Beagen in 2011. Since then, Native Earth Performing Artshas produced numerous acclaimed theatre works, including Tombs of The Vanished Indian (2012) by Marie Clements, The Circle: Visions of a Hoop Dancer (2013) by Tjay Henhawk, Café Daughter (2013) by Kenneth T. Williams and Huff (2015), by Cliff Cardinal.

A Theatre Company on a Reserve

In Northern Ontario, Manitoulin Island's De-Ba-Jeh-Mu-Jig, founded in 1984, was the first and remains the only professional theatre company located on a First Nations reserve. Their work is dedicated to the vitalization of the Anishinaabeg (Ojibwa) culture, language and heritage through education and the sharing of original creative expression with Indigenous and non-Indigenous peoples. The company produced Drew Hayden Taylor's Toronto at Dreamer's Rock, earning Taylor a Chalmers Award in 1992. Three boys meet at the sacred dreamer's rock — one from the past, one from the present and another from the future — raising issues of contemporary Aboriginal identity in a humorous and moving play for young audiences. Since its original production, Toronto at Dreamer's Rock has been extensively produced around the country by companies such as Theatre Direct and Magnus. In 2009, De-Ba-Jeh-Mu-Jig expanded with the opening of the Debajehmujig Creation Centre, a 15,000 square foot multidisciplinary creation, production and training centre.

Taylor's Bootlegger Blues, originally produced by De-Ba-Jeh-Mu-Jig in 1990, was awarded the Canadian Authors Association Literary Award for Best Drama in 1992. In 1994, Taylor was appointed artistic director of Native Earth, launching the 1994-95 season with Someday, a witty play about a rural Indigenous family that is unexpectedly reunited with a long-lost daughter. Someday was most recently produced in 2016 by the De-Ba-Jeh-Mu-Jig Theatre Group, in Manatowing, Ontario. Like Highway, Taylor's strength is his humour and precision in portraying reserve life. Aside from Someday, The Bootlegger Blues, and Toronto at Dreamer’s Rock, Taylor has written a number of acclaimed and broadly produced plays, including alterNatives, The Buz’Gem Blues, 400 Kilometres and Only Drunks and Children Tell the Truth.

Inuit theatre expression has long been the subject of Nakai Theatre Ensemble in the Yukon, which focuses on the Northern experience. Young People's Theatre has also explored Inuit issues in its production of Whale (1993), a beautiful epic drama informed by Inuit legend and northern environmental issues. Nakai Theatre has a history of producing theatre that deals with homelessness, poverty, discrimination and cultural appropriation, such as Leonard Linklater and Patti Flather's Sixty Below, Yellow on Thursdays by Sara Graefe, and Joseph Tisiga's Late Nite with Grey Owl. In 1996, Nakai Theatre initiated the New Theatre North Playwrights Festival, which paired established Canadian playwrights with local talent. In 2008, Nakai Theatre began the annual Pivot Theatre Festival, which features a program of local works and productions from across Canada. Notable Nakai Theatre productions include Speak (1999), by Greg Nelson, So Many Doors (2007)by Celia McBride and Broken (2013) by Brian Fidler.

By the early 1990s, many established theatre companies were receptive to Indigenous theatre projects. Productions have toured and been staged at many established mainstage theatres. In 1994, Canadian Stage Company invited Tomson Highway to become playwright-in-residence. Métis playwright Ian Ross won both the John Hirsch Award for most promising Manitoba writer in 1996 and the Governor General's Award for drama in 1997 for his play fareWel, which premiered at Winnipeg's Prairie Theatre Exchange in 1996 and was remounted at the Edinburgh Fringe Festival in 2001.

Another signal that the community had matured was the move to make the Native Theatre School independent from ANDPVA. The school was renamed the Centre for Indigenous Theatre (CIT). Under the artistic direction of Floyd Favel and Monique Mojica, CIT expanded the school's activities and became a crucible for the development of an Indigenous performance culture which, by the end of the 20th century, had lodged itself firmly in the mainstream of Canadian theatre.

In Saskatoon, the Gordon Tootoosis Nīkānīwin Theatre (formerly the Saskatchewan Native Theatre Company), founded in 1999 by Gordon Tootoosis, Tantoo Cardinal, Donna Heimbecker, Kennetch Charlette and Dave Pratt, offers programs to youth to encourage them to engage in the arts, while providing professional programming and co-productions with Saskatoon's Persephone Theatre. Recent Gordon Tootoosis Nīkānīwin Theatre productions include Kenneth T. Williams’ In Care (2016), about a mother’s battle to remove her children from foster care, Curtis Peeteetuce’s Kohkoms in Toyland (2016), a surreal journey into a toy store just north of a reserve, and Andrea Ledding’s Dominion (2016), an exploration of history and love relationships that revolves around two couples trapped in one washroom.

In Vancouver, Urban Ink Productions, founded by Métis artist Marie Clements in 2001, has produced many of Clements' plays including Burning Vision (2002) and Copper Thunderbird (2007). Now under the direction of Corey Payette, the company creates, develops and produces Aboriginal and diverse cultural works of theatre, writing and film. Payette’s Children of God, a musical about an Oji-Cree family whose children were taken away to residential school, will premier in 2017 as an Urban Ink production.

In Edmonton, Alberta Aboriginal Arts was co-founded in 2009 by Ryan Cunningham and Christine Sokaymoh Frederick, both Métis from Edmonton, to bring together artists of multiple disciplines and Aboriginal traditions. They host an annual Rubaboo Arts Festival (Rubaboo is a Michif word for a stew made on the trap line), a celebration of Aboriginal theatre and culture.

The Future of Indigenous Theatre

A younger generation of Aboriginal playwrights and performers has surfaced in Canada in the last decade. One of the most notable is Anishnaabe artist Waswaate Fobister, whose show Agokwe (“two-spirited”) explores an intense love relationship between two teenage boys from nearby reserves. Agokwe opened at Buddies in Bad Times Theatre in Toronto in 2008 and won six Dora Mavor Moore Awards.

In 2019, the National Arts Centre is set to launch a new Indigenous Theatre, which is envisioned to hold as much influence and stature as the NAC’s long-established English and French theatre companies.