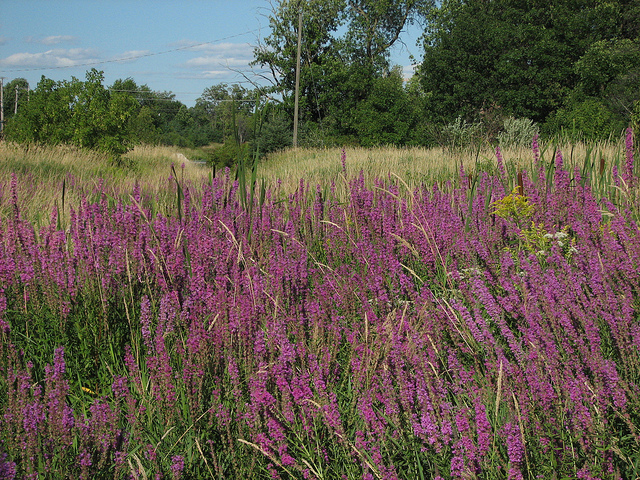 Purple loosestrife is one of the most abundant invasive plant species found in Canada.

Invasive species have the potential to affect every region in Canada. The Canadian Food Inspection Agency estimates that 1,229 non-native vascular plants are established across the country; of those, 486 are troublesome enough to be considered an “invasive” or “weedy” species.

These troublesome species have spread into each of Canada’s 13 provinces and territories, with Ontario, Quebec and British Columbia seeing the largest percentages and Nunavut, Northwest Territories and Yukon the fewest. (Of the 486 invasive alien vascular plants in Canada, almost 91 per cent — 441 species — are present in Ontario.) Each of Canada’s ecozones, too, are home to invasive plants. From the Arctic Cordillera with its one invasive plant to the Mixedwood Plains of Southern Canada and its 139 alien species, Canada is home to an extensive array of foreign plants.

These alien plant species are a concern to governments, biologists, farmers and resource economists for the extensive ecologic and economic damage they can do to crops, rangeland for livestock, the health of forests and Canada’s overall biodiversity.

How do Invasive Plants Spread?

Invasive species are introduced to new habitats both intentionally and accidentally, though humans are almost always involved in some way. When ocean-going ships empty their ballast (a compartment at the base of the vessel, used to help it balance) in the Great Lakes, for example, that water, often taken on in distant parts of the world, can carry numerous species not native to the basin.

Non-native plants have been introduced to Canada and North America more broadly since the arrival of European colonists more than 400 years ago. However, the bulk of Canada’s invasive plants arrived in the 19th century with the expansion of ship-based global trade and a surge in immigration. Into the 20th century, growth in invasive plants slowed but nevertheless continued, with an average of 0.58 new invasive plants arriving in Canada each year.

Researchers estimate that 58 per cent of Canada’s invasive alien plants were introduced intentionally for use in agriculture, landscaping, medicine or research. For those that didn’t arrive in Canada on purpose, they likely arrived as seeds unintentionally mixed in with imported soil or crop seeds.

Given that Canada’s climate is similar to many parts of Europe, and that many of the country’s earliest settlers also immigrated from Europe, it follows that an estimated 80 per cent of Canada’s invasive plants are of European, western Russian or Mediterranean origin. Approximately 15 per cent have come from Japan and China, largely as ornamental and landscaping plants.

Given Canada’s shared climate with northern US states, it’s perhaps strange that 615 invasive plants existing in states bordering Canada are not established here. Yet as shifts in climate change force many native and non-native species to move north or to higher altitudes in search of familiar living conditions, many of these species not presently in Canada may cross the border in the years ahead.

Why are Invasive Plants a Concern?

Invasive plants are a concern for many reasons:

While the costs of living with invasive species are difficult to pin down, partial estimates exist that show just how expensive managing invasive plants can be. In the Prairies, $320 million is spent every year to protect canola yields from the invasive Canada thistle; in Manitoba, meanwhile, leafy spurge has attacked over 137,500 hectares of land and requires $19 million in treatment costs annually (see Case Study: Leafy Spurge).

More broadly, researchers studying the issue in 2004 found the economic impact of just 16 non-native species (including plants like leafy spurge and spotted knapweed and fungi like Dutch elm disease) on everything from crop yield to fisheries to tree death was between $13.3 billion and $34.5 billion every year. 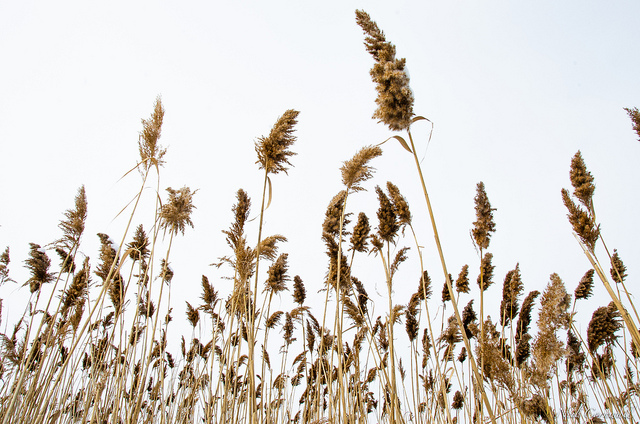 Phragmites in a park in Windsor, Ontario. This invasive species can grow up to 5 m tall and outcompete native grasses for water and sunlight.

Common reed, also known as Phragmites, is a wetland grass native to Europe and Asia. Since its introduction to North America, Phragmites seeds are easily dispersed by the wind, allowing it to spread widely and grow in tightly packed bunches up to 5 m tall in marshes, on lakefronts and in roadside ditches across the continent.

Like many other invasive plants in Canada, Phragmites has caused trouble for native biodiversity because of its ability to outcompete native grasses for resources. Like garlic mustard, Phragmites has changed the soil composition of wetlands by releasing toxins into the ecosystem, making it harder for native competitors to survive. Its long roots and thick stems make Phragmites an incredibly sturdy invasive, one that often makes it impossible for snakes and wetland turtles to pass through.

Because of the hardiness of Phragmites, control options are complex and require sustained herbicide spraying, cutting and burning the dead plants. At Long Point and Rondeau provincial parks in Ontario, environmental NGOs and government ministries have treated more than 1,500 hectares over the past few years. As a result of the labour-intensive approach, their work is paying off, with some targeted locations seeing substantial reductions in Phragmites. 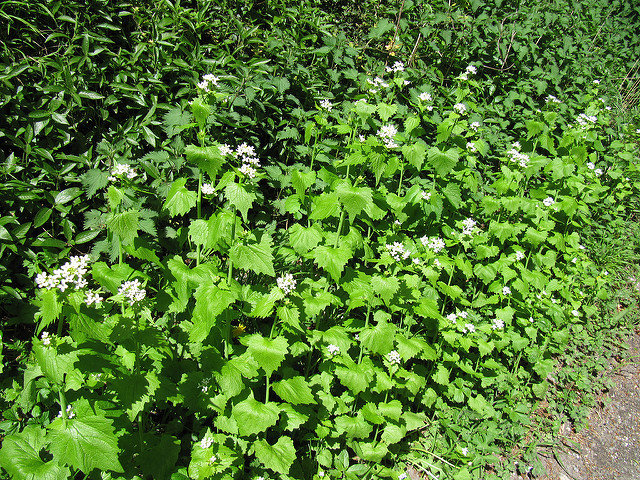 Garlic mustard is one of North America’s most aggressive invasive plants, spreading at a rate of 6,400 sq. km every year. The herb, native to Europe and rich in vitamins A and C, first arrived in Canada in the 19th century and was cultivated for eating.

After spending its first year putting down a substantial root system, garlic mustard grows in dense stands, producing 60,000 seeds per sq. m. This allows especially thick stands of garlic mustard to double in size every four years. The plant has also ensured its long-term success by rising first from a deciduous forest floor each spring to take advantage of abundant sunlight. Within five to seven years of its introduction, garlic mustard is typically the most dominant plant in the forest. It has also benefited from abundant white-tailed deer populations that graze down other native shrubs while leaving garlic mustard behind.

Left unchecked, garlic mustard has changed the structure of forest soils to make it easier for itself to survive, all while making it more difficult for native shrubs and trees to germinate. By hindering the growth of certain fungi that help transport nutrients to the roots of plants, garlic mustard is also hurting numerous species-at-risk.

Spraying with herbicides or manually pulling the plant up from its roots are the two primary methods for controlling garlic mustard after it’s taken over. If successful, native plants typically require years to return to pre-garlic mustard biodiversity levels. 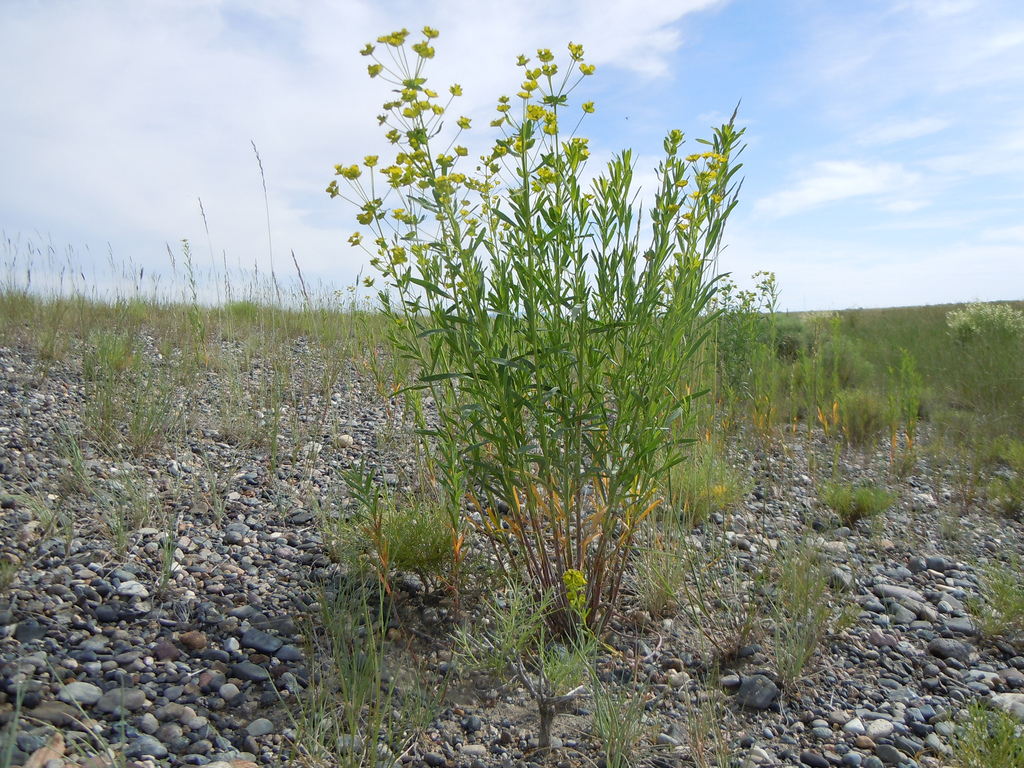 Leafy spurge is an invasive plant species found in almost every province and territory.

Leafy Spurge is native to southern Europe, and was recorded in Canada for the first time in the 19th century. Its stems can grow to 1 m tall, capped with clusters of small, yellow flowers that can eject seeds up to 5 m away. Their spread throughout Canada during the 20th century was rapid. Today, leafy spurge grows unchecked in all provinces and territories but Newfoundland and Labrador, the Northwest Territories and Nunavut.

The plant is federally classified as a prohibited noxious weed in the Seed Act to limit its spread to agricultural fields. They do this by spreading a wide canopy and root structure to hog water and sunlight, in addition to releasing toxins to prevent nearby plants from growing. In this way, it has reduced the biodiversity of rangelands across Canada and the United States.

Milk produced by leafy spurge has also been known to cause irritation and skin rashes in livestock and humans. In Manitoba alone, leafy spurge has grown to dominate more than 140,000 hectares of land (an area the size of BC’s Glacier National Park), costing farmers and governments roughly $19 million every year to keep grazing land clear. 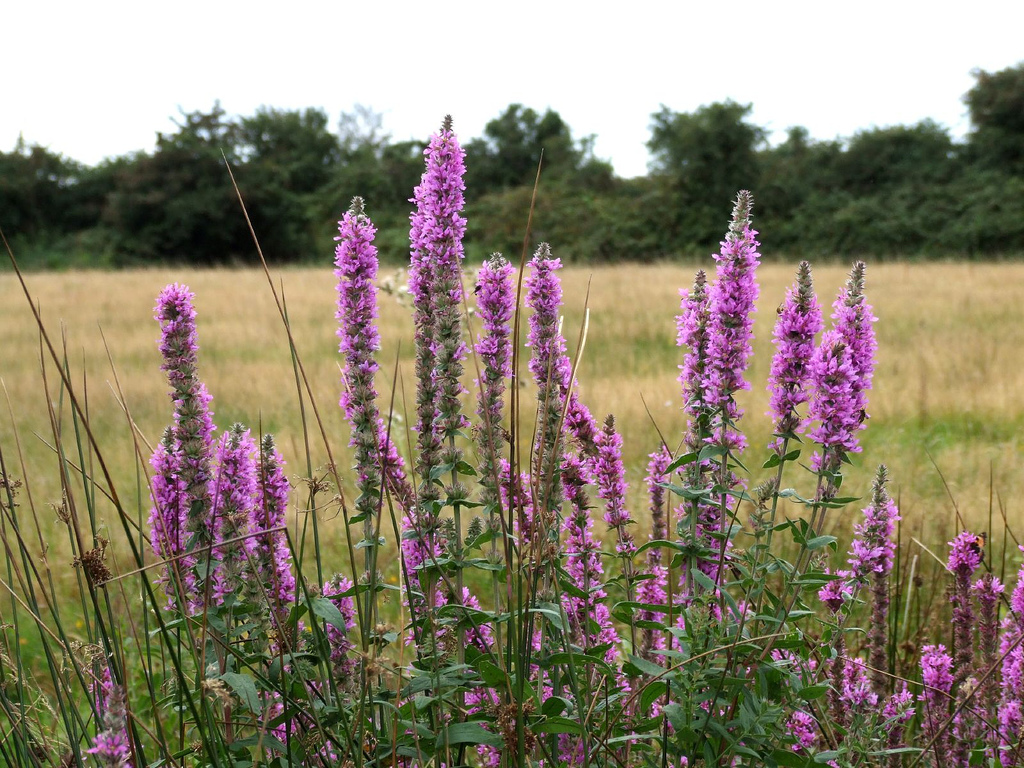 Purple Loosestrife, a wetland flowering plant native to Europe and parts of Asia, first arrived in Canada in the early 19th century as seeds in the soil ballast of ocean-going ships. The 1.5 m tall marsh plant quickly spread throughout North America, taking root in wetlands, lakefronts and damp ditches along roadways.

It’s the sheer abundance of purple loosestrife that has made it one of Canada’s more troublesome invasive plants. It forms thick mats of roots that often prevent native plants from finding space to take root and access sufficient nutrients, space and light to thrive. Each individual purple loosestrife plant can produce up to 30 flowering stems, capable of making 2.7 million seeds each year. As such, purple loosestrife has come to clog irrigation canals, reduce biodiversity in wetlands and make farming difficult. 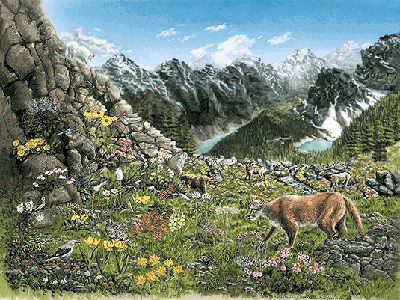