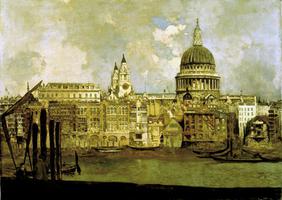 James Kerr-Lawson, painter (b at Fifeshire, Scotland 28 Oct 1862; d at London, Eng 1 May 1939). He came to Hamilton, Ontario, with his family. He studied at the Ontario School of Art 1879-1880, in Rome at the Académie de France, at the Accademia di Belle Arte with Luigi Galli from 1880-1881, and at the Académie Julian, Paris, from 1881-1884. He was back in Canada in 1885-87, where he associated with William BRYMNER and Homer WATSON. From 1887 he travelled in France, Italy, Spain and Morocco, basing himself in Glasgow and from 1900 in London. In the 1890s he associated with the British artists George Frederick Watts, John Lavery and Frank Brangwyn, and the Anglo-American James McNeill Whistler. Around 1897 he met the American scholar and art dealer Bernard Berenson, who would assist Kerr-Lawson as a private dealer.

Kerr-Lawson's paintings of portraits and landscapes of the late 1880s and 1890s show the Realist-plein air influence of Jules Bastien-Lepage, while his decorative paintings from 1904 give evidence of his love of Venetian painting, specifically the work of Canaletto and Tiepolo. His work is characterized by fine drawing, flat tonalities and decorative effects. He was especially known for his architectural view interpreted in murals and lithographs. He was a founding member of the Senefelder Club in 1908, formed to revive interest in lithography.

While an expatriate Canadian like so many other artists of his generation, Kerr-Lawson maintained contact with Canada, was a member of the Canadian Art Club 1912-15 and in 1916 was commissioned by Lord Beaverbrook to paint 2 large decorations of Arras and Ypres for the Canadian War Records, installed in the new Senate in Ottawa in 1921. In the 1920s he painted a number of portraits inspired by the work of Italian Renaissance artists.